Behind the Rangers’ decision to acquire Brendan Smith

The man the Rangers wanted most was on the Garden ice in a Capitals jersey, the man they actually got to help their blue line was still en route to New York — and this was still on the eve of the NHL trade deadline.It was an eventful 36 hours for the Blueshirts,... 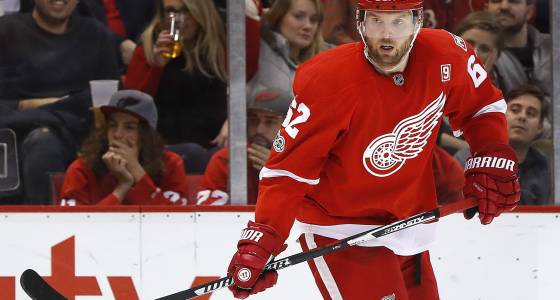 The man the Rangers wanted most was on the Garden ice in a Capitals jersey, the man they actually got to help their blue line was still en route to New York — and this was still on the eve of the NHL trade deadline.

It was an eventful 36 hours for the Blueshirts, as first they found out Monday that the Capitals, their Metropolitan Division rival and the best team in the league, traded a king’s ransom for the most coveted piece on the market, right-handed defenseman Kevin Shattenkirk. The New Rochelle native and childhood Rangers fan then suited up for the Caps as they took on the Rangers at the Garden on Tuesday night.

Then, just hours before the Rangers’ 4-1 loss to the Capitals, general manager Jeff Gorton traded for a less-expensive option, Red Wings defenseman Brendan Smith, sending a second-round pick in 2018 (obtained from Ottawa in the Derick Brassard-Mika Zibanejad deal last summer) and a third-round pick in 2017 to Detroit.

“He’s a player we’ve liked for a while,” Gorton said of the 28-year-old lefty who can play both sides, is a pending unrestricted free agent and was a teammate of current Rangers Ryan McDonagh and Derek Stepan while playing at the University of Wisconsin.

“The group thinks that his skating, the way he plays the game, the fact he can play the left and the right side, the fact that he brings some toughness, that he’s got some players in our room that have played with him so he’s not walking into the room without knowing anybody — I think the combination of all those things made it a good fit for us.”

The Red Wings were in Vancouver at the time of the trade, so Smith could not make it to New York in time for Tuesday’s game. He is expected to join the team for Wednesday’s practice before leaving for Boston, where the Rangers will take on the Bruins on Thursday night.

The 6-foot-2, 210-pounder from Mimico, Ontario, had played 33 games this season, missing almost all of January with a MCL sprain in his knee. But since he returned Feb. 4, the hard-nosed Smith had played in all of Detroit’s nine games and averaged just over 20 minutes of ice time.

Meanwhile, the Rangers, who are solidly in playoff position, didn’t want to overpay too drastically for Shattenkirk, 28, who is also going to be an unrestricted free agent this summer. Despite St. Louis offering him a sign-and-trade offer said to be a seven-year, $42 million deal, he longed for free agency.

“I think really what it comes down to at the end of it, as a player, this is a chance that you don’t really get too many kicks at,” Shattenkirk said. “You just have to make sure it’s the right situation. For me, it was just a matter of being patient.”

Washington general manager Brian MacLellen sent highly touted prospect Zach Sanford, plus a first-round pick in 2017 and a conditional second-round pick — the conditions of which are terrifically complicated — in exchange for Shattenkirk and No. 3 goalie, Pheonix Copley. The Blues also retained 39 percent of what is remaining on Shattenkirk’s $4.25 million salary-cap hit this season, which enabled the deal to get done under Washington’s tight cap ceiling.

Gorton had been in talks with St. Louis GM Doug Armstrong about Shattenkirk, but found the asking price a little too steep.

“If you want a player in this type of market, generally you’re going to overpay,” Gorton said. “That’s just the way it is, if you look at all these trades.”

There was still time for Gorton to wheel and deal before the deadline, but he also called things “fairly quiet” by the time his team finally took the ice.

“I like our team. I think we have a good team,” Gorton said. “I think we’ve had a pretty good year, but I think we have a ways to go to get to where we want to. If something is out there that would improve in any area, we would do it.”