It will be interesting to hear what the Bears have to say about Alshon Jeffery when general manager Ryan Pace and coach John Fox meet with reporters Wednesday.It will be even more intriguing to learn what kind of market develops for the wide receiver... 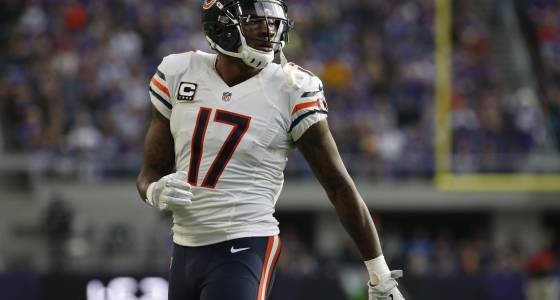 It will be interesting to hear what the Bears have to say about Alshon Jeffery when general manager Ryan Pace and coach John Fox meet with reporters Wednesday.

It will be even more intriguing to learn what kind of market develops for the wide receiver this week with Jeffery poised to enter free agency March 9 as the Bears have decided not to place the franchise tag on him as they did a year ago.

Surely, the Bears would like Jeffery back on a multi-year contract, something they couldn't accomplish after using the tag last year. The two sides never got close on an agreement. Occasionally, the best way for a team to get a deal done with one of its own free agents is to allow him to test the open market.

It's a tactic the Bears used a number of times under former general manager Jerry Angelo. For instance, they re-signed perennial Pro Bowlers Lance Briggs and Olin Kreutz to long-term deals after each got a good look at what was available in free agency.

Briggs learned the market wasn't hot for an outside linebacker who didn't rush the quarterback and Kreutz made the rare decision to accept less money than he had on the table from the Dolphins. Defensive lineman Israel Idonije also was re-signed after he explored the market.

But sometimes you lose such a player and the Bears have to be operating this week as if Jeffery could be gone. They likely are sifting through free-agent possibilities such as Terrelle Pryor (who the Browns are trying to re-sign), DeSean Jackson, Kenny Stills, Kenny Britt, Pierre Garcon and Robert Woods, among others.

The Bears wanted to bring back Bernard Berrian in 2008 when he became a free agent at the same time as Briggs. The Vikings lured the wide receiver away with a $42 million, six-year deal with $16 million guaranteed and Briggs wound up returning.

The Berrian numbers aren't even remotely applicable for Jeffery, who is in his prime at 27 even if he hasn't had a great season since 2014. Jeffery was aiming to be paid in the top tier at his position last offseason. The Bears didn't come close to offering him money in the range of A.J. Green, Julio Jones, Dez Bryant and Demaryius Thomas, who all averaged between $14 million to $15 million annually, Moreover, the market has been reset as the Steelers extended Antonio Brown earlier this week with a new deal that averages $17 million per season.

What will Jeffery find on the open market? That's anyone's best guess and his agent Tory Dandy surely will shoot for the moon and some nearby stars. The Bears are by no means out of it. They simply have elected not to implement the franchise tag.

There are eight teams projected to have more than $50 million in salary cap room and at least 20 will have more than $25 million with the actual cap not yet set. In other words, it's going to be a seller's market.

Some top players already have been tagged and the Chiefs prevented safety Eric Berry from reaching free agency with a $78 million, six-year deal.

It was probably an easy decision not to place the franchise tag on Jeffery again, a proposition that would have guaranteed him, $17.5 million this season. No, the Bears are not in position to allow talented players to exit Halas Hall and yes they have oodles of salary cap space with a projected figure of nearly $60 million that will rise after the team sheds quarterback Jay Cutler.

But just because you don't know what Kevin White can do and there's a ton of cap space sitting there doesn't mean overpaying Jeffery for one season to get back to the exact same position at this time next year is a good idea.

There's little doubt the Bears would like Jeffery back, especially the player they had in 2013 and 2014. But he has had two shots at a contract year under Pace and couldn't keep his body in shape the first time and got zinged with a four-game suspension for violating the NFL's policy on performance-enhancing drugs the second time around.

He's super talented and receivers who can make 50/50 balls downfield more like 80/20 propositions are rarely on the open market. Depending on where things go this week, maybe the Bears have a shot at re-signing Jeffery. It certainly might be sensible to overpay for a guy you know rather than one you don't but only if you're signing him for multiple years rather than applying the franchise tag.

But the decision with Jeffery isn't going to determine whether or not the Bears reverse their sagging fortune. What the team does to find a new quarterback will resolve that.