When Deshaun Watson grabs a football and takes the field at Lucas Oil Stadium Saturday morning, wearing a T-shirt and shorts instead of a jersey and shoulder pads, there will be no defensive players disguising coverage in front of him. When he drops back... 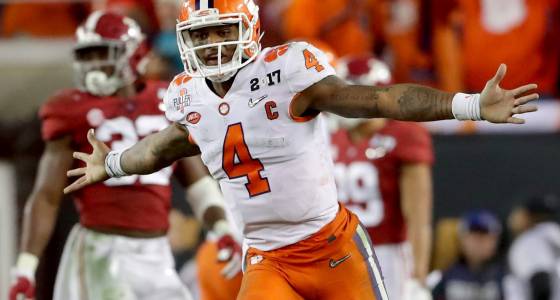 When Deshaun Watson grabs a football and takes the field at Lucas Oil Stadium Saturday morning, wearing a T-shirt and shorts instead of a jersey and shoulder pads, there will be no defensive players disguising coverage in front of him. When he drops back to pass with dozens of pro scouts analyzing his technique and accuracy, he will set comfortably without a 260-pound linebacker harassing him and determined to knock his head off.

If Watson were indeed in live action, maybe the Bears and every other quarterback-needy team at the NFL scouting combine that runs through Monday would learn answers to some of the most important questions about the Clemson star's NFL readiness.

As it stands, though, the so-called underwear Olympics in Indianapolis offer the Bears limited returns in their ongoing search for a quarterback. Some important elements of their evaluations can be advanced at the combine, such as medical exams and 15-minute interviews to gauge personality and character. But that's only part of a greater reconnaissance effort that could continue through the end of April.

In Watson's case, and in that of every other quarterback who's part of a draft class widely considered to be underwhelming, game video is central to projecting NFL potential. But, as NFL Network draft analyst Mike Mayock sees it, Watson and others still can help themselves at the combine.

"What you really want is to whet the appetites of all these teams so they say, 'I can't wait to get a private meeting with this kid, go out to dinner with him, get a private workout,'" Mayock said. "In other words, you want this kid to have all 32 teams say: 'Wow, I want to spend more time with you.'"

Such meetings normally occur later in March or April, as teams welcome draft prospects on visits to team headquarters and traverse the country to attend pro days on college campuses.

Bears general manager Ryan Pace and his lieutenants figure to have their schedules jammed with quarterback appointments, perhaps barring a strong move for a veteran quarterback as the new league year commences March 9.

As the calendar flips Wednesday and the start of 2017 league business draws nearer, it's worth remembering Pace's Jan. 4 acknowledgment of how "significant" the organization's offseason quarterback decisions are during this cycle. Providing an early candidate for understatement of the year, he used the word "critical" twice in describing how the quarterback will affect their attempt to rebound from the worst 16-game season in franchise history.

As league executives and agents gather in Indianapolis, wheels will begin to turn quicker on the Bears' quest for quarterback clarity.

Jay Cutler remains on the roster rehabilitating from surgery he had in December to repair the labrum in his throwing shoulder. As the Bears explore how to move on from him, his ability to pass a physical likely is a factor. How close he is to that milestone remains guarded information.

While the Bears have no contractual deadline forcing a move, adding Cutler to the league-wide supply of quarterbacks — either by trade or release — could help their search, hoping another quarterback-needy team fills its vacancy with him instead of dipping into the draft pool.

At the very least, the combine opens the window in which the Bears could execute a transaction involving the quarterback who has served them for the past eight years.

Beyond Cutler, the approaching start of the 2017 trade period will likely be accompanied by rumors about the price tag for and teams' interest in Patriots backup Jimmy Garoppolo, Cowboys backup Tony Romo and Bengals backup A.J. McCarron. Those three remain under contract with their respective teams.

Developments involving vets will run their course parallel to evaluations of college prospects. Mayock on Monday echoed a popular sentiment about this year's quarterback class, an unfortunate opinion considering the Bears' need and their draft position of third overall.

"I don't have a top-10 grade on any quarterback in this draft," he said.

The NFL readiness and potential of Watson and others, including North Carolina's Mitch Trubisky, Notre Dame's DeShone Kizer and Texas Tech's Patrick Mahomes, is a dominant storyline as the pre-draft process begins in earnest.

Each passer comes with pressing on-field questions that won't be answered at the combine: Trubisky's relative lack of collegiate experience (only 13 starts); Kizer's consistency and ability to make a positive impact in close, high-leverage end-game situations; Mahomes' gun-slinger style and the risk-reward tradeoff that entails; Watson's accuracy from the pocket against the pass rush and disguised coverages.

Answering those questions, or at least projecting answers, is the Bears' challenge. Definitive conclusions aren't waiting inside Lucas Oil Stadium this weekend, but the path to finding them leads through there.

It's not the most important part of the Bears' quarterback search, but for a process so significant, every step is meaningful.