Famagusta 16°
overcast clouds
BUSINESS EDUCATION ENTERTAINMENT HEALTH POLITICS SCIENCE SPORTS TECHNOLOGY
10:22 Four Benefits of Hiring a Dedicated Development Team
04:48 Mark Kelly, President of Safety Marking Inc., Discusses Structuring Effective...
17:58 Trump wants to play golf at the Biden swearing-in in Scotland - but is...
17:54 First doubts Regarding tightened Steps: two National Countries Extract...
10:39 Covid-19 : in France, the end of containment and entry into force of the...
04:34 The schools of Rome will use the Internet with light bulbs: what it is...
10:58 Kratom Tea: How Is It?
11:46 Office Furniture Products for you!
12:17 Top Clubs, Their Value, Revenue And Current Standings
11:14 Reasons Why Rewarding Yourself is a Good Practice
BIST
1543
GOLD
442.860
USD
7.3891
GPB
10.1046
EUR
8.9740
Breaking News
Online Etiquette Rules for Managing a Virtual Business
Close

Barnwell's 5 moves for all 32 NFL teams

Some NFL teams have a lot to do before the new league year begins March 9, while others won't have to make critical calls until the first day of the NFL draft on April 27. Click on the links below to read about the first five things that should be on the... 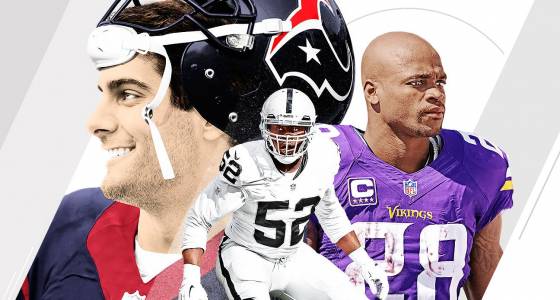 Some NFL teams have a lot to do before the new league year begins March 9, while others won't have to make critical calls until the first day of the NFL draft on April 27. Click on the links below to read about the first five things that should be on the minds of each team's brass as they prepare for the offseason.

Arizona Cardinals: Should Arizona put the franchise tag on star pass-rusher Chandler Jones or let him hit the open market? Five moves for the Cardinals.

Atlanta Falcons: What are the Falcons' options with RB Devonta Freeman, who's nearing the end of his cheap rookie contract? Five moves for the Falcons.

Baltimore Ravens: Brandon Williams has established himself as one of the NFL's best nose tackles. Baltimore has to decide: Pay him or let him walk. Five moves for the Ravens.

Buffalo Bills: Should the Bills stick with quarterback Tyrod Taylor or start over with someone fresh in the draft or free agency? Five moves for the Bills.

Carolina Panthers: The Panthers have a clear need for a deep threat at wide receiver. Who makes the most sense for Carolina to target in free agency? Five moves for the Panthers.

Chicago Bears: Chicago has the option of putting the franchise tag on WR Alshon Jeffery. But is he worth $17.5 million for 2017? Five moves for the Bears.

Cincinnati Bengals: Tyler Eifert is entering the final season of his rookie contract. Should the Bengals extend him now or wait to see if he can stay healthy? Five moves for the Bengals.

Cleveland Browns: Which makes more sense for Cleveland: draft a quarterback in the first round or target one in free agency? Five moves for the Browns.

Dallas Cowboys: What kind of value should the Cowboys be looking for when fielding trade offers for quarterback Tony Romo? Five moves for the Cowboys.

Denver Broncos: The Broncos have two young quarterbacks on the roster, but should they go all-in for Romo? Five moves for the Broncos.

Detroit Lions: Ezekiel Ansah had only two sacks in 2016. Is now really the time for the Lions to sign the pass-rusher to an extension? Five moves for the Lions.

Green Bay Packers: What should the Packers do about their gaping hole at running back? Do any big names make sense? Five moves for the Packers.

Houston Texans: The Texans need a quarterback and Jimmy Garoppolo could be an option. What would they have to give up to get him? Five moves for the Texans.

Indianapolis Colts: How should the Colts address their massive void at pass-rusher with the free-agent market looking as if it will be thin at the position? Five moves for the Colts.

Jacksonville Jaguars: The Jaguars have the money to give Allen Robinson an extension. What can they expect to pay for the WR? Five moves for the Jaguars.

Kansas City Chiefs: Both Eric Berry and Dontari Poe are set to hit the free-agent market. Is it possible for K.C. to keep both of them? Five moves for the Chiefs.

Los Angeles Chargers: Should the Chargers sign pass-rusher Melvin Ingram to a long-term deal or let him play with the franchise tag? Five moves for the Chargers.

Minnesota Vikings: How should the Vikings handle Adrian Peterson's $18 million cap hit, the highest (by far) for a running back? Five moves for the Vikings.

New England Patriots: How much leverage do the Patriots have in Jimmy Garoppolo trade negotiations, and should they move the QB? Five moves for the Patriots.

New Orleans Saints: How can New Orleans fill its void at pass-rusher without breaking the bank in free agency? Five moves for the Saints.

New York Giants: The Giants have two key defensive linemen getting ready to hit free agency. Should they retain both Jason Pierre-Paul and Johnathan Hankins? Five moves for the Giants.

New York Jets: The Jets (again) have a hole at quarterback with no heir apparent on the roster. What are they to do now? Five moves for the Jets.

Oakland Raiders: Quarterback Derek Carr has only one season left on his team-friendly rookie contract. How much should the Raiders expect to pay? Five moves for the Raiders.

Pittsburgh Steelers: Both Le'Veon Bell and Antonio Brown are set to receive big raises. How can the Steelers make both work? Five moves for the Steelers.

San Francisco 49ers: What should the 49ers do with the No. 2 overall pick -- draft a QB, trade it for a QB or take the best player available? Five moves for the 49ers.

Seattle Seahawks: Jimmy Graham has only one year and $10 million left on his contract. Does it make sense to give the TE an extension? Five moves for the Seahawks.

Tampa Bay Buccaneers: RB Doug Martin had a disappointing season after getting a hefty contract. Should the Bucs keep him around? Five moves for the Buccaneers.

Tennessee Titans: The Titans are fond of running two-TE sets. Which free agent makes the most sense for them to target? Five moves for the Titans.

Washington: For the second season in a row, Washington has a decision to make on QB Kirk Cousins. Is a long-term deal in the team's future? Five moves for Washington.