Bangor Area High School’s girls basketball team went into Saturday in search of a signature win. But, after scoring just seven points in the first half, it looked as if the only thing the Slaters were going to sign off on was their season. Third-seeded... 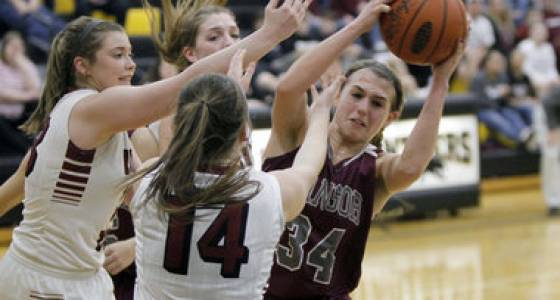 But, after scoring just seven points in the first half, it looked as if the only thing the Slaters were going to sign off on was their season.

Third-seeded Bangor rallied after the break, however, and knocked off second-seeded Pottsville 38-28 in the District 11 Class 5A semifinals at Panther Valley Intermediate School.

The Slaters advance to meet Southern Lehigh, which defeated East Stroudsburg North 48-6, in the district final March 4 at a time and site to be determined.

“It’s definitely a win for ourselves, for our coaches, our parents and everyone that’s been supporting us,” said Slaters senior Marissa Fernandez-Tierney. “Two years ago, we didn’t even make it to the playoffs. It’s the same exact girls as the last two years. We’ve grown together.”

Bangor’s offense then found its footing thanks to a few momentum-changing plays from Fernandez-Tierney and classmate Nicole Robinson.

Robinson swished a 3-pointer to pull the Slaters within 19-17; Fernandez-Tierney converted an and-1 opportunity off a transition layup to take the lead at 20-19; and Robinson drained another 3 to go ahead 23-19 with 3:41 left – and bring the Bangor faithful to their feet.

“We came out on fire,” said Robinson, a guard. “It was really exciting.”

“We knew what we thought our advantages were with some of our players’ quickness against some of their bigger players,” Bangor coach Bill Bisci said. “… We got a few layups in the third quarter and knocked down some shots. Once we get some confidence, we’re all right.”

Junior Brieann Ohland made a layup while absorbing a shot to the face, giving the Slaters a 30-23 lead with 5:11 left in the fourth quarter.

It wasn’t super-efficient (8-for-18 in the fourth quarter), but Bangor held off the Tide from the foul line from that point forward.

While the free throws made Slaters fans nervous, the team’s defense and rebounding rose to the occasion while facing a size and length disadvantage against Pottsville.

“Our coaches told us that we only had five rebounds in the first half,” Fernandez-Tierney said. “We knew that if we were going to win the game, we couldn’t let them have second shots.”

“We had to get more aggressive on the boards,” Bisci said. “What ended up helping us is that they were 1-and-done a lot of the time in the second half.”

Fernandez-Tierney had a game-high 15 points and was, as she’s been all year, a coach on the floor and catalyst for the Slaters (20-5).

“She does a lot for us and I expect a lot out of her,” Bisci said. “… She does a lot of things in practice and on the floor for us. When someone is messing up, she’s telling them — I don’t have to do a lot of that. She’s getting smarter as a player and she’s worked at it.”

The victory provides some validation for Bangor, which now has won 20 games without a selection on the All-Colonial League first team. It provides players like Robinson and Fernandez-Tierney, who both overcame ACL injuries in their careers, with a tangible reward for their work.

The Slaters seniors have come a long way since going 7-15 as sophomores.

“It’s kind of like ‘Ha, we told you we would be good. Just give us some time,’” Robinson said. “It’s nice to prove everyone wrong.”

“We’ve talked for three years now about a big win, a big win and trying to get to where we want to be,” Bisci said. “They bought into it … We worked hard at this and we believed in what we could do.”