CaptionCloseOklahoma quarterback and Big 12 player of the year Baker Mayfield was released from jail in Fayetteville, Ark., after he has been arrested and charged with public intoxication, disorderly conduct, fleeing and resisting arrest.Mayfield was released... 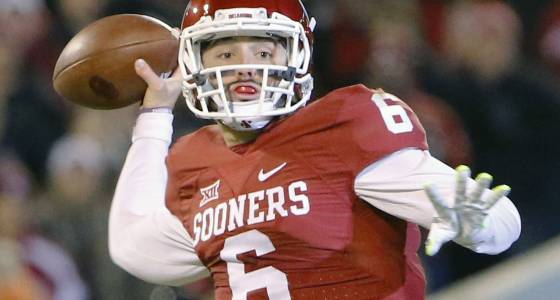 Oklahoma quarterback and Big 12 player of the year Baker Mayfield was released from jail in Fayetteville, Ark., after he has been arrested and charged with public intoxication, disorderly conduct, fleeing and resisting arrest.

Mayfield was released from the Washington County Detention Facility at 11:23 a.m. He has a court date scheduled for April 7 in the Fayetteville District Court. The Sooners' spring game is scheduled for the next day.

Mayfield, an Austin native who originally started his college career at Texas Tech, is an early favorite for the Heisman Trophy after passing for nearly 4,000 yards last season and leading the Sooners to a 35-19 Sugar Bowl triumph over Auburn.

"We are aware of the matter and are learning the details," the statement said. "We don't have any other information at this time."

A full police report will be available on Monday. An excerpt provided to Oklahoma City radio reporter Dylan Buckingham indicates that Mayfield appeared to be agitated and argumentative at the time of his arrest.

"I asked Mayﬁeld to stop and talk to me. Mayﬁeld stated he was trying to break up an altercation that had occurred prior to my arrival. I asked Mayﬁcld to stay so I could take his statement for my report. While talking to the other party involved. Mayﬁeld was yelling profanities and was causing a scene. Mayﬁeld was intoxicated. When he ﬁrst came over to me. he had difﬁculty walking down a couple stairs. Mayﬁeld's speech was slurred and he had the odor of intoxicants coming from his person. The front of Mayﬁeld's clothing was covered in food. I told Mayﬁeld to come over to me. When l gave that command. Mayﬁeld began to walk away from me. I repeatedly told him to stop. Mayﬁeld then began to sprint away. I chased alter him. Mayﬁeld was tackled to the ground. While on the ground. I gave repeated orders for him to place his arms behind his back. May ﬁeld kept his arms locked tight and would not allow me to place his arms behind his back. I eventually forced Mayﬁeld's arm behind his back. I then placed him in handcuffs."

Mayfield was booked at 8:21 a.m. on Saturday, ESPN.com reported.  He faces an April 7 court date for the public intoxication charge, according to the sheriff's office.

The OU quarterback was expected to be a challenger for the Heisman Trophy after finishing in the top five in balloting each of the previous two seasons.

During his 2016 season, he broke the FBS single-season passing efficiency record. Shortly before the bowl game, he announced he would return to the Sooners for his senior season in 2017.