Avalanche quiet on all fronts in Philadelphia

PHILADELPHIA - On the eve of the NHL trade deadline Tuesday, the last-place Avalanche was quiet - much like the players' sleep-walking first period at the Wells Fargo Center.Nobody was moved on the trade front, and nobody played well early in a 4-0 loss... 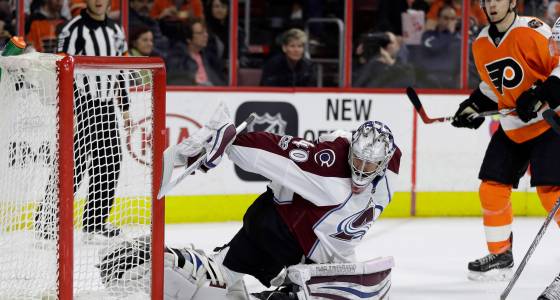 PHILADELPHIA - On the eve of the NHL trade deadline Tuesday, the last-place Avalanche was quiet - much like the players' sleep-walking first period at the Wells Fargo Center.

Nobody was moved on the trade front, and nobody played well early in a 4-0 loss to the Philadelphia Flyers, who led 3-0 midway through the first period.

"It wasn't on my mind," Avs captain Gabe Landeskog said postgame of Wednesday's 1 p.m. trade deadline. "This has been talked about for months now, and obviously it's so close now it could be a distraction. We're all professional and we know what we have to do out there. We just weren't sharp enough the first 10 minutes of the game."

Center Matt Duchene, who like Landeskog might be traded for top young prospects and draft picks, also said the deadline had nothing to do with the team's start.

"When you're playing meaningless games, and we've been playing meaningless games since December, (being traded) is something that kind of creeps up on you at times," Duchene said. "But I can say I wasn't thinking about it during the game, or during my preparation. You have to be a good pro and tune that stuff out. I was doing my best to do that and it had no bearing tonight."

The downtrodden Avs (17-41-3), who are scheduled to begin practice Wednesday in Kanata, Ontario, at the time the deadline passes, found a way to further stamp themselves as one of the worst teams in recent years by digging themselves a 3-0 hole just 10:35 into the game.

The Flyers scored on journeyman goalie Jeremy Smith while the game's first two penalties were being served. During a wretched Colorado power play, Philly scored on a 3-on-1 shorthanded rush. Soon after, the Flyers capitalized on their first power play to make it 3-0.

"They got that first one on the PK and it deflated us a little bit, got us on our heels," Duchene said. "After that, I thought we were pretty good."

Wayne Simmonds appeared to complete a natural hat trick (three consecutive goals) with that power play. He celebrated, thinking the goal was his. The referees, however, didn't believe Simmonds successfully swatted the puck into the net after it caromed off Avalanche defenseman Francois Beauchemin, and the official scorer felt the same.

So the hundreds of hats thrown onto the ice were all for naught, and led to the booing of Jakub Voracek when the right winger was announced as the official goal scorer. During the first intermission, Voracek apologized for taking credit for the goal and hoped the crowd would never boo him again.

The Avs had plenty chances to forge a comeback, particularly when Mikko Rantanen was hooked from behind on a breakaway and awarded a penalty shot. But Rantanen did not get a shot off on goalie Steve Mason and the Flyers later took a 4-0 lead on Jordan Weal's first career goal.

"First period, we come out and we weren't physically ready to go," Avs coach Jared Bednar said. "We were on our heels and we let them come at us … After that, second period, we had a good second and were creating (chances). A lot like our season, we have a lot of good chances, especially there in the second, and we don't capitalize."

"It shows that he cares a lot and that he's a character guy who's trying to jump-start his team," Bednar said of Landeskog. "There's no other reason for it besides that, so it looks good on him to try to get us going."