For the last 2 1/2 years, if top high school quarterback Artur Sitkowski opted to stay in-state for college it would have been good news for Rutgers. But, two months after transferring from Old Bridge High School to IMG Academy in Florida, Sitkowski... 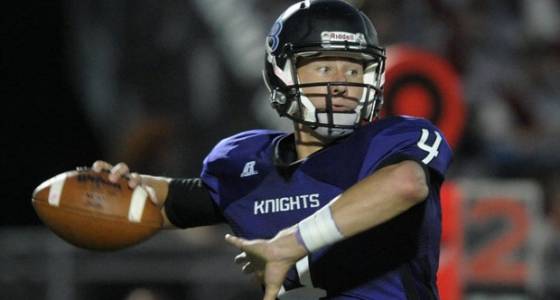 For the last 2 1/2 years, if top high school quarterback Artur Sitkowski opted to stay in-state for college it would have been good news for Rutgers.

But, two months after transferring from Old Bridge High School to IMG Academy in Florida, Sitkowski committed to Miami. He announced his decision on Twitter.

The four-star recruit is ranked as the No. 5 pro-style quarterback in the class of 2018 by 247 Sports. Among the handful of people he thanked on social media for his development was former Rutgers star Val Barnaby, a trainer at ESSA Sports Performance in Tinton Falls.

With Rutgers offensive coordinator Jerry Kill expected to run a cross between its traditional pro-style attack and the spread offense first implemented last season, Sitkowski was a desired target.

Rutgers signed top in-state quarterback Johnathan Lewis in 2017 but coach Chris Ash's objective is to improve depth and bolster competition on the roster through recruiting. The Scarlet Knights rarely have had more than one top quarterback recruit on the roster at the same.

The 6-foot-4, 220-pound passer spent his first three football seasons at Old Bridge before making the move to IMG Academy in December. He will play at the football powerhouse on a state-of-the-art campus -- which also trains college stars like Leonte Carroo and Darius Hamilton for the NFL Draft -- as a senior.

"Rutgers is recruiting the heck out of me," Sitkowski told NJ Advance Media's Todderick Hunt earliter this month. "I'm still in great contact with those guys. Rutgers is a top school in my recruitment and its awesome."

Under former coach Kyle Flood, Rutgers was the first school to offer a scholarship to Sitkowski, after he played three games as a freshman.

The timing of the commitment comes as a bit of a surprise given Sitkowski's previous stated intentions to "take his time," consider multiple schools and visit Rutgers "a couple times" while back in New Jersey on spring break in March.

Sitkowski completed 104-of-209 passes for 1,216 yards with six touchdowns and nine interceptions as a junior. He also rushed 77 times for 215 yards and eight touchdowns.

"I came down here to be the best quarterback I possibly can be and be great," Sitkowski said. "Exceed and be better than what others think of you. I want to be the best possible version of myself."

With former Georgia coach Mark Richt at the helm, Miami appears to be on an upward climb. The Hurricanes are coming off a nine-win season, finished with the No. 13 recruiting class in the class of 2017 and already have 12 commitments for 2018.

It's a great day to be a rifle armed Hurricane! WOW!! U Family!!