LOS ANGELES – San Antonio’s sustained consistency, depth and Hall-of-Fame caliber coaching once provided the Lakers a gauge on their playoff readiness.With the Lakers far removed from that picture in recent seasons, the Spurs have since offered... 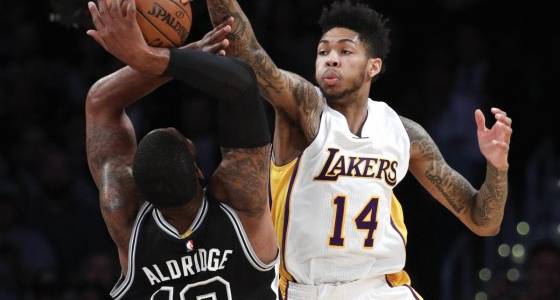 With the Lakers far removed from that picture in recent seasons, the Spurs have since offered clarity on the gap between both franchises. As demonstrated in their 119-98 loss to the Spurs on Sunday at Staples Center, the Lakers are nowhere close to that level.

Afterward, Lakers coach Luke Walton lamented the team’s lack of “heart” and “competitive spirit” as the Spurs’ Kawhi Leonard (25 points), LaMarcus Aldridge (16) and Pau Gasol (15 points) scored with ease. After watching his team trail by as many as 28 points, Walton wondered if the Lakers (19-41) lost their fourth consecutive game partly because of the 12:30 p.m. tipoff time. Walton described the locker room before the game as “dead,” offering an ominous foreshadowing on how the Lakers looked on the court.

“It’s unacceptable in front of our home crowd against a team like the Spurs. They’re used to getting everyone’s best shot every night,” Walton said. “We’re trying to build and get somewhere. That was unacceptable.”

It seemed puzzling the Lakers would play that way against the Spurs (45-13) for two reasons.

One, Lakers president Jeanie Buss watched from her floor seat while Lakers president of basketball operations Magic Johnson watched in a private suite. That marked the Lakers’ first home game since their front-office shakeup.

“I would’ve imagined they would played harder,” Walton said. “if it affected them one way or the other.”

Two, the Lakers fit the view of 29 other teams that view the Spurs’ multiple championship runs, sustained playoff appearances and endless consistency under longtime coach Gregg Popovich with both jealousy and admiration.

“You know what you’re going to get when you play the Spurs,” Lakers guard D’Angelo Russell said. “Us building our identity, that’s what we want to be.”

The Lakers showed enough offensive production with Brandon Ingram (career-high 19 points on 10-of-15 shooting), Jordan Clarkson (19) and Russell (18). But the assist disparity between the Spurs (37) and Lakers (16) also illustrated the difference in ball movement. While Julius Randle shot only 2 of 9 from the field, Nick Young only shot 3 of 8 overall.

“When we get together for that long, it’s going to happen. But it’s not only with time,” Clarkson said. “We have to put the work in to keep getting better and compete and figure out what’s wrong and leave it out on the floor.”

Since the Lakers did not do that, Walton raised his voice after trailing, 61-41, at halftime.

“I don’t like to yell and scream in front of people,” Walton said. “That’s not the way I believe in coaching. Behind closed doors, absolutely. As a group for the most part, they normally respond and pick it up. I thought they picked it up.”

But even with an improved second-half effort, the Lakers stayed within a double-digit deficit. So Russell remarked in frustration, “You definitely got to hear it, but I think he’s tired of repeating himself.”

“We have to come out hungry,” Ingram said. “We came out like we were the veteran team tonight, and the Spurs had all the energy. They had the momentum of every quarter of the game.”