With so many young players in camp, everyone from Chicago White Sox vice president Kenny Williams to new director of player development Chris Getz to new manager Rick Renteria is trying to figure out who can do what.Tim Anderson is one of those youngsters,... 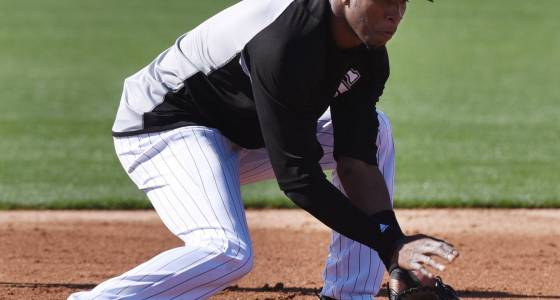 With so many young players in camp, everyone from Chicago White Sox vice president Kenny Williams to new director of player development Chris Getz to new manager Rick Renteria is trying to figure out who can do what.

Tim Anderson is one of those youngsters, but the Sox's 23-year-old shortstop is already leaning more toward exclamation point than question mark.

"He's pretty happy," Renteria said. "He's loose, he's comfortable. He's starting to get a bit more comfortable with everything, the whole aspect that surrounds the game of baseball."

Could he play shortstop? Could he show discipline as a hitter?

Anderson answered both questions last season when he joined the Sox from Class AAA Charlotte on June 10.

"It was such a blessing to come up and do what I did," the soft-spoken infielder said.

Among American League rookies, he was first in doubles, tied for first with 33 multihit games, second with 57 runs and third with 116 hits.

Anderson, who also showed he has the ability to play shortstop, drew only 7 walks in 292 at-bats from his June debut through the end of August.

But as he settled in and started taking more pitches, Anderson walked 6 times in 118 at-bats to close the season.

Over the winter, he continued working to become an even better hitter.

"I just wanted to work more away because I feel like my strength is away," Anderson said. "I feel like when I tend to kind of pull a little, I seem to roll over a lot of things. It's really just up the middle and away."

The Sox still have veterans in camp like Todd Frazier, Jose Abreu, Jose Quintana and Melky Cabrera. Renteria looks to them for leadership, but he already sees a similar quality in Anderson.

"We talked about him just being a leader by example," Renteria said. "He doesn't have to say much but I said, 'You can if you want.' But just be a leader by example, by going about your business. I think he's going to continue to develop and be a pretty good piece."

As a young holdover from last season, Anderson is excited about continuing to develop with other young players like Yoan Moncada, Reynaldo Lopez, Lucas Giolito, Michael Kopech, Zack Collins and Zack Burdi.

"It's going to be exciting here in a few more years as the guys come up," Anderson said. "We are all young, so we are going to be together for a while."