Permitting Alshon Jeffery to reach free agency hurts the Chicago Bears on multiple levels.Say what you want about Jeffery's past two seasons -- derailed because of injuries and suspension -- but he's an accomplished and coveted player. Jeffery averaged... 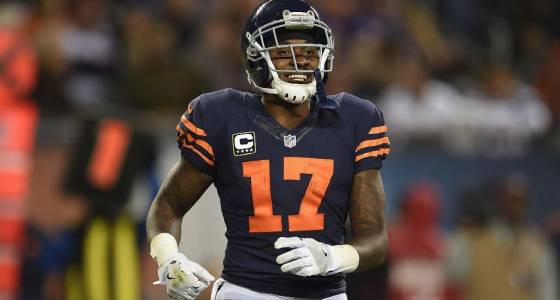 Say what you want about Jeffery's past two seasons -- derailed because of injuries and suspension -- but he's an accomplished and coveted player. Jeffery averaged 72.2 receiving yards per game for the Bears; only Brandon Marshall (78.3) averaged more per game in team history (32-game minimum). Wide receivers like Jeffery, 27, rarely hit free agency -- most teams go out of their way to extend No. 1 receivers. There will be substantial interest in Jeffery’s services beginning March 9, and the Bears' reluctance to engage in any recent meaningful contract talks puts them at a disadvantage. Jeffery wants to play for a contender and will strongly explore all options.

Without Jeffery, the Bears are vulnerable at wide receiver.

The franchise hasn’t abandoned hope of 2015 first-round pick Kevin White developing into a star player. Unfortunately, White has suffered two separate season-ending injuries to the same leg since the Bears drafted him. There is no way of knowing if he’ll ever pan out. Veteran Eddie Royal has enjoyed a fruitful NFL career, but he has been unable to stay healthy the past two years. Royal -- in the final year of his contract -- is set to earn $5 million, but none of it is guaranteed. Former seventh-rounder Marquess Wilson, who is seemingly always hurt, is coming out of his original rookie contract. Receivers such as Josh Bellamy (restricted free agent) and Deonte Thompson (exclusive rights free agent), who played large roles in 2017, are better suited for special teams. Daniel Braverman, Chicago’s 2016 seventh-round choice, barely played last year as a rookie.

Third-year receiver Cameron Meredith is coming off an impressive season, but no one is ready to anoint him a No. 1.

The Jeffery decision creates a gaping hole on the depth chart. The Bears have to get serious about pursuing receivers in free agency and the draft, but will any be better than Jeffery? Remember, Jeffery has 13 career 100-yard receiving games. And from 2013-14, Jeffery combined for 174 receptions, 2,554 yards and 17 touchdowns.

That’s not easy production to replace.

Yes, $17.5 million is a large salary-cap number for one player to carry. But Chicago is positioned to be in the top five in cap space (the cap is also expanding), and that is before $13 million is cleared with the expected release or trade of Jay Cutler.

Speaking of quarterback, the Bears are moving on from Cutler and therefore are expected to have a new starter in Week 1. If the new quarterback happens to be a younger player, or maybe even Jimmy Garoppolo, whom is he supposed to throw the ball to? The Bears plan to prioritize an offseason quarterback upgrade, yet allow the club’s most decorated receiver to walk away for nothing? Even a veteran bridge quarterback -- Brian Hoyer, for example -- can thrive only with quality receivers.

The Bears have essentially left the cupboard bare -- unless they aggressively address receiver next month and beyond.

But Chicago already had glaring needs at quarterback, tight end, cornerback and safety before they declined to apply a second tag on Jeffery.

Why create another unnecessary void on the roster?