All the sights from the Yankees' spring opener vs. Phillies (PHOTOS)

Spring has finally sprung, at least in Florida, where the Yankees opened their Grapefruit League schedule Friday with a 9-4 win over the Philadelphia Phillies at George M. Steinbrenner Field in Tampa, Fla. Check out the sights from the Yankees'... 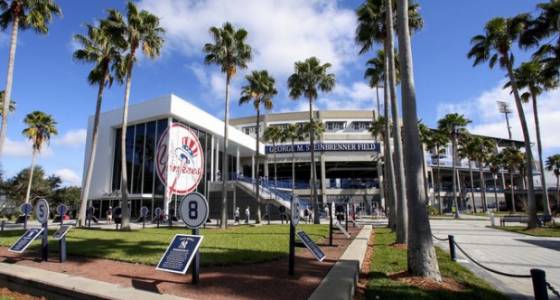 Spring has finally sprung, at least in Florida, where the Yankees opened their Grapefruit League schedule Friday with a 9-4 win over the Philadelphia Phillies at George M. Steinbrenner Field in Tampa, Fla.

Check out the sights from the Yankees' win in the photo gallery at the top of this story.

Here's a quick list of the Yankees' main offseason moves:

-- Adding Chapman to a unit with Dellin Betances has once again given the Yankees one of the league's best bullpen back ends.

-- The team moved McCann at what was likely his peak trade value, considering Gary Sanchez took the job last season from the veteran, who's stated his preference to be a starter. The trade netted the Yankees right-hander Albert Abreu, whom MLB.com ranks as the team's 10th best prospect.

-- Trading McCann opened the DH spot for Holliday, a seven-time All-Star out to prove he's still got something left in his once-potent bat. Holliday is also expected to provide occasional coverage in the outfield corners and at first base.

The 28-year-old ace can become a free agent at season's end, when he can opt out of the seven-year, $155-million deal he signed before the 2014 season.