It's never a great time to face the high-flying Warriors, who lost Kevin Durant for at least a month with a sprained medial collateral ligament and bruised tibia in his left leg.But even with the Warriors and their top-ranked offense losing Durant for Thursday's... 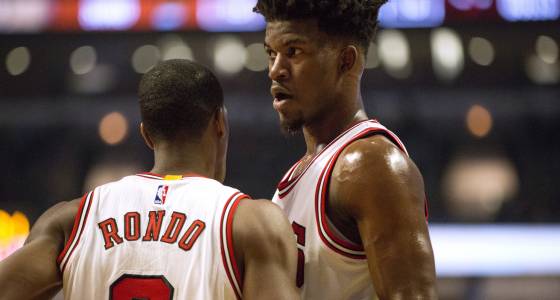 It's never a great time to face the high-flying Warriors, who lost Kevin Durant for at least a month with a sprained medial collateral ligament and bruised tibia in his left leg.

But even with the Warriors and their top-ranked offense losing Durant for Thursday's game and beyond, this week is bad timing for the Bulls.

Their defense has been sliding. And it's not just because Taj Gibson is playing for the Thunder.

"February obviously was our worst month defensively," coach Fred Hoiberg said. "You look at the splits, our offense has gotten better. But we've got to find a way to get back to guarding. It starts with transition with our team. We've gotten exposed against several teams. You have to get back, load to the ball and still be able to close out to the shooters.

"It's also an individual battle that you've got to take some pride in and go out and win. We didn't win enough of those (Tuesday) night. They were going around us and when we did come and help, they would spray it out to the shooter or get it to somebody rolling to the rim. It exposed us. It starts with guarding and competing on the ball. We need to be better in that area."

Even without Durant, the Warriors obviously are a powerhouse.

"They still have three Olympians," Hoiberg said, citing Stephen Curry, Klay Thompson and Draymond Green, "the two-time MVP (Curry) and they're coming off a loss. Obviously, they're the team to beat with the addition of Durant."

"We're still in the playoff hunt," ," Hoiberg said. "We're still doing everything we can to put ourselves in position to win games and at the same time, try to develop our young players. They're going to be very valuable for the future of this organization."

Rondo has handled the situation professionally, albeit in occasionally bemused fashion.

"I'm trying to do what I always do and that's push the pace," he said. "I've been playing a little bit better than I have in the middle part of the year when my role changed. But I guess we're experimenting."

Layups: Paul Zipser and Carter-Williams returned to full practice but their status for Thursday was yet to be determined. ... The 76ers announced star rookie Joel Embiid will miss the remainder of the season with a torn left meniscus. The Bulls still face the 76ers twice.