Abu Dhabi: Al Jazira go into Monday’s 2017 AFC Champions League Group B encounter with Esteghlal Khouzestan at the Mohammad Bin Zayed Stadium — desperate to end a miserable run of form in the competition.The Abu Dhabi side’s 3-0 defeat away to Lekhwiya... 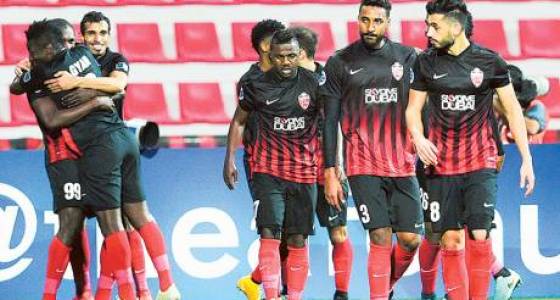 Abu Dhabi: Al Jazira go into Monday’s 2017 AFC Champions League Group B encounter with Esteghlal Khouzestan at the Mohammad Bin Zayed Stadium — desperate to end a miserable run of form in the competition.

The Abu Dhabi side’s 3-0 defeat away to Lekhwiya on matchday one last Monday was their 10th game without a win on the continent, while their record against Iranian opposition does not read much better, having lost three and drawn one of their past four matches.

No such worries for Esteghlal Khouzestan, however, as the debutants celebrated a 1-0 victory over Saudi Arabia’s Al Fateh on their first AFC Champions League appearance as they joined Qatar’s Lekhwiya as the early pace-setters in Group B.

This will be Esteghlal Khuzestan’s first trip away from home in the tournament.

Meanwhile, the Arabian Gulf League leaders Jazira are winless in their last five group games on home turf (D1, L4), last winning a home group game in February 2014 against Al-Rayyan. The Pride of Abu Dhabi have gone 16 matches without a clean sheet in this tournament and without a win in 10 games (D1 L9).

Twenty minutes earlier, Al Fateh will host Lekhwiya still searching for their first victory in Asia’s premier club competition. The Saudi Arabian side conceded with 10 minutes remaining against Esteghlal Khouzestan last week to go down 1-0, meaning Fethi Jebel’s team have now gone seven without a win on the continent ahead of the tie at the Prince Abdullah Bin Jalawi Stadium. Lekhwiya, who will welcome back Spanish defender Chico Flores from suspension, go into the game having not lost in four group-stage encounters with Saudi opposition.

Elsewhere, Lokomotiv Tashkent will look for their first points of the ACL when they welcome Dubai’s Al Ahli in a Group A clash.

After suffering a 1-0 reversal to Saudi Arabia’s Al Taawoun last week, 2016 quarterfinalists Lokomotiv have now failed to score in five of their past six ACL matches and will need to break that trend if they are to have any chance of advancing to the knockout rounds for a second successive year.

Al Ahli began their continental campaign by seeing off Esteghlal of Iran 2-1 at home thanks to Senegalese striker Makhete Diop’s last-minute winner, but have lost three out of their previous four group-stage away games. However, Brazilian Everton Ribeiro’s solitary strike ensured a 1-0 victory over Nasaf on their last visit to the Central Asian country in 2015.

This will be the first meeting between these teams in the ACL, although Lokomotiv Tashkent are winless in their previous four encounters with UAE teams, scoring only once in those games (D3, L1).

Meanwhile, Al Ahli have lost three of their last four games away from home in the group stage, although their only win in that period came against Uzbekistan side FC Nasaf Qarshi.

In Group A’s other match, Esteghlal will be aiming to end a run of three successive defeats to Saudi Arabian opposition when they take on debutants Al Taawoun.