Cubs 3, Angels 1 (fourth inning)After a 29-minute rain delay before the start of the game, Addison Russell cranked a three-run home run in the third inning to vault the Cubs to a 3-1 lead entering the fourth Tuesday at Sloan Park. At the plate: Manager... 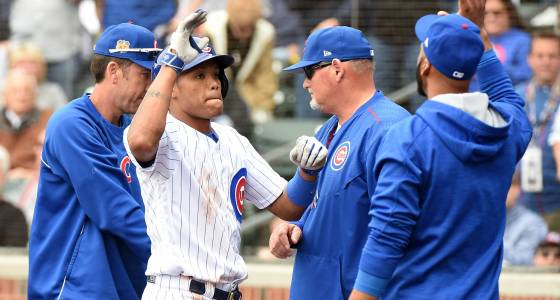 After a 29-minute rain delay before the start of the game, Addison Russell cranked a three-run home run in the third inning to vault the Cubs to a 3-1 lead entering the fourth Tuesday at Sloan Park.

At the plate: Manager Joe Maddon is getting a look at Russell at the cleanup spot, which could come in handy in games in which Ben Zobrist bats leadoff. Anthony Rizzo drew two walks, including the second walk that set up Russell’s second homer in as many games.

On the mound: Alec Mills, who is targeted to start at Triple-A Iowa, worked out of a jam in the first. Mills has been compared to Kyle Hendricks because of his control and reliance on offspeed pitches.

In the field: Catcher Miguel Montero sprinted to the backstop to catch a pop-up by C.J. Cron for the first out in the first. Center fielder Albert Almora Jr. crashed into the center-field fence after catching a drive by Jefry Marte in the third.

Key number: 4 – Home runs by the Cubs this spring.