Adam Warren: My skill can keep me from Yankees job I want

CLEARWATER, Fla. — Adam Warren made it clear what part of Joe Girardi’s pitching staff he wants to work from.Saturday morning Girardi said Warren would be on the staff either as a starter or reliever. Later in the afternoon, following two clean frames... 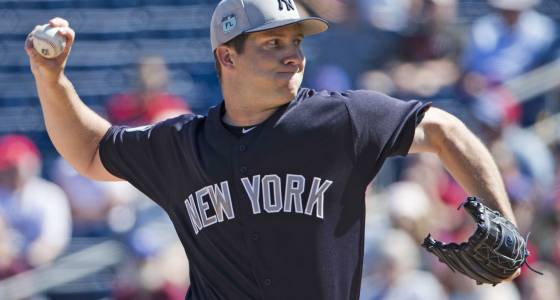 CLEARWATER, Fla. — Adam Warren made it clear what part of Joe Girardi’s pitching staff he wants to work from.

Saturday morning Girardi said Warren would be on the staff either as a starter or reliever. Later in the afternoon, following two clean frames against the Phillies in a 6-5 loss at Spectrum Field, Warren was asked what he was looking to prove in the exhibition season.

Warren is joined by Luis Severino, Bryan Mitchell, Chad Green and Luis Cessa in the fight for the two open spots in the rotation and understands he has a huge edge in big league experience as a reliever over that quartet.

“I was talking to Larry [Rothschild, pitching coach] the other day and he said it could hurt you out of the bullpen and you are flexible,’’ Warren said. “Maybe I can go out there and pitch good enough to make them put me in the rotation. I do know [pen experience] is going to hurt me, but that is a good thing as well.’’

“Some people might view it that way, but I don’t view it that way because he has been successful in both places where some of these other guys you are not sure,’’ Girardi said of the belief that Warren gets hurt in the starters race because of his record in the pen. “I think you have to take a long look at it and decide what’s best in the long run for this year and gives us the best chance to win.’’

Girardi recalled Warren as a starter two seasons ago.

“I thought the year [2015] that he did start, I thought he did a really good job and that’s important, too. When you look at the three guys at the back end [of the bullpen], they are pretty good,’’ Girardi said of Tyler Clippard, Dellin Betances and Aroldis Chapman. “The great thing about Adam is that he could give you a couple of innings if he had to fill in for any of those guys. So it’s kind of see what we got and see what the other starters are too and we will make an evaluation.’’

Unlike the other four competing for a rotation spot, Warren is the only one likely to stick in the big leagues. Severino, Cessa, Green and Mitchell could land in Triple-A Scranton/Wilkes-Barre in some capacity.

Yankees should reinvent how they use pitchers to grit out wins 0:0 TAMPA – Forget everything you know about how to run...

Start or relieve, Warren can do both, but on the second day of the exhibition season it was clear what job he wants.