This week, we're examining each ACC team's schedule, identifying the biggest games, looming upsets and most grueling stretches for each.Last up: Syracuse OrangeEven though Syracuse went 4-8 in Dino Babers' first year, the Orange made significant progress.... 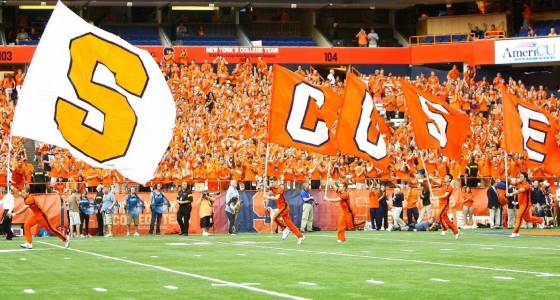 This week, we're examining each ACC team's schedule, identifying the biggest games, looming upsets and most grueling stretches for each.

Even though Syracuse went 4-8 in Dino Babers' first year, the Orange made significant progress. They should be better in 2017, but the schedule ranks as the most difficult in the ACC, featuring games against 10 bowl teams. Five of those teams finished ranked in the AP Top 25.

The good news here is that there is a bye between the Miami and Florida State games. Otherwise … not good news at all. This could be the toughest three-game stretch anybody in the conference plays in 2017, and it was handed to the team that could use a break or two when it comes to the schedule (what with a road trip to LSU and the Atlantic Division slated). It just so happens this is the year the Orange play Miami as its rotating crossover opponent, and it just so happens that game is squeezed in between the top two teams in the conference. Babers and his team did pull an upset on Top 25 Virginia Tech a year ago, but going 1-2 in this stretch would be far more impressive.

It's hard to name a "trap game" for a losing team that will be the underdog in a majority of its games. So we're going with one that Syracuse fans expect to win but could be trickier than expected: Middle Tennessee. The Blue Raiders went 8-5 last season and return quarterback Brent Stockstill (3,233 yards passing, 31 touchdowns, 7 interceptions) and receiver Richie James (1,625 yards, 12 touchdowns). Meanwhile, former Syracuse coach Scott Shafer returns to the Carrier Dome for the first time as new Middle Tennessee defensive coordinator.

The two programs share a long history together, and as such, this one is their ACC rivalry game. This game has been moved back to the final weekend of the regular season, so the stakes are just a little bit higher. A win here could either mean bowl eligibility (and that would be a huge accomplishment considering the schedule difficulty) or it could mean momentum headed into a crucial third year for Babers. A loss here, and there will more than likely be some difficult questions to answer in the offseason.

Projected W-L: This schedule would be brutal for any team, let alone one that has just undertaken a massive rebuilding effort. Syracuse could win four to five games and still be vastly improved. The win-loss record wouldn't reflect that because of the opponents it has to play.