ACC mailbag: No down year for Clemson in 2017

With David off this week, I’m taking the reins of the Friday mailbag for the time being. I’ll openly admit my inability to keep pace with any of his 80s music references, but hopefully I’ll meet his standard in answering your ACC queries.@JShankerESPN... 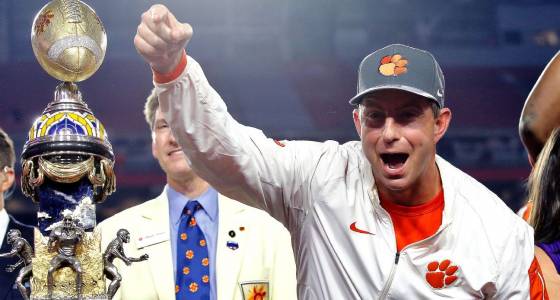 With David off this week, I’m taking the reins of the Friday mailbag for the time being. I’ll openly admit my inability to keep pace with any of his 80s music references, but hopefully I’ll meet his standard in answering your ACC queries.

@JShankerESPN @DavidHaleESPN Will Clemson have a down year like FSU did the year after Winston left? Great D, but inexperienced QB

It wasn't just Jameis Winston's departure that caused Florida State's "down year" in 2015. The 2014 Seminoles had a player drafted at every offensive position, and they had four defensive players drafted in the first three rounds. There is no replacing Deshaun Watson, and you saw how the fortunes of programs like Florida and Texas A&M suffered after losing generational talents. The bigger concern is the complete remodeling of the offense as the incoming quarterback won't have as many established weapons. The Tigers are better equipped for the 2017 rebuild than those Seminoles, but they have a much harder schedule. So what constitutes as a down year when Auburn, at Louisville and at Virginia Tech make up the September schedule and Way-Too-Early No. 2 Florida State is on the slate? Alabama is the only team in position to contend annually, and if Clemson matches FSU's 10 wins in 2015 that would be a success.

I knew this one had to be coming, so you'd think I'd have time to generate a solid answer. The extra time just made things more confusing. It's easy to make a championship case for more than half of the division's teams. Virginia Tech has the coaching combo of Justin Fuente and Bud Foster. Miami is in good hands with Mark Richt. Pittsburgh could be pretty strong on offense again. Georgia Tech finished the season as one of the league's best teams. The problem is each of those teams will have a new starting quarterback this season. I'll go with Miami beating out Georgia Tech for the Coastal, because the Miami defense should be quite good. Speaking of which ...

@aadelsonESPN The QB question aside, my other question with Miami is how good do you think the 2ndary can be to go along with the front 7?

It's easier breaking in a new secondary when the front seven is one of the conference's best. It also helps most of the division is working in a new quarterback. The Canes were 12th nationally in yards per attempt last season, but ace cornerback Corn Elder (and three more defensive backs with starting experience) have left the program. By virtue of its location, Miami will always have the ability to recruit elite skill players. There's only so many high school players with the perfect frame for the defensive line. Will the Canes finish in the top 15 of yards per attempt again? Maybe not. But I don't believe the overhaul in the secondary will sink Miami's chances of winning the Coastal.

@JShankerESPN @DavidHaleESPN Hale answered this before the season started. Still relevant so what are your thoughts? https://t.co/7A592axLRd

The ACC is a really good league, and even Florida State fans should be ready to acknowledge this after years and years of carrying the flag for the conference. There isn't much shame in losing to an unranked ACC team at the moment. There are three teams I've identified as potentially upsetting Florida State as an unranked underdog: Miami, NC State and Louisville. The Cardinals are undergoing a lot of changes on defense and could have two or three losses when the teams meet. I think Florida State goes 7-1 in the conference, but whichever team beats the Seminoles will enter bowl season ranked.

@aadelsonESPN @TarHeelFootball lost a lot of offensive skill production to graduation, who's going to replace that production in 2017?

There's a lot of uncertainty surrounding North Carolina's offense, and as David pointed out recently they're in the rare position of losing almost 90 percent of their offensive production from a year ago. Quarterback is the biggest question, but Jimbo Fisher said last season how it's up to the players around the QB to help ease the transition. Of course, UNC has new guys at those positions, too, but Larry Fedora is intrigued with the potential of sophomore running back Jordon Brown. Austin Proehl was a quality receiver that was overlooked last season. Jordan Cunningham was an ESPN 300 recruit that transferred from Vanderbilt. Juval Mollette is another name North Carolina fans should remember, too.

@JShankerESPN @DavidHaleESPN Will the VT-WVU game be as big as it use to be? And do you think VT will choose black jerseys to lose in again?

First, the sooner teams get rid of the black alternates the better. They went out of style with frosted tips. Programs, do better with the alternate jerseys. Recruits will respond to any alternate jersey no matter how ugly. Remember those hideous uniforms Maryland wore not too long ago? Anyway, as for the West Virginia-Virginia Tech game, it should be a good one. Tony Gibson has created an edge on the WVU defense, which returns Dravon Henry in 2017. It's our first look at Will Grier in Dana Holgorsen's offense, too. The Virginia Tech offense will look different, but Fuente's earned the benefit of the doubt. By season's end it might not be one that shapes the playoff race, but it should be a good game regardless. If you remember, Holgorsen's Mountaineers challenged Alabama in the opener a few seasons ago. Holgorsen will have his team ready.