ACC commissioner John Swofford said Wednesday he expects a decision on future conference championship game sites to come no later than the league's spring meetings in May.The ACC Council of Presidents is scheduled to discuss the matter at a meeting during... 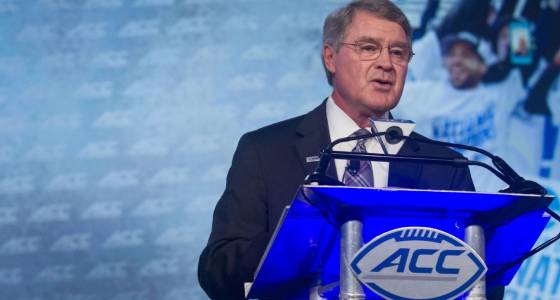 ACC commissioner John Swofford said Wednesday he expects a decision on future conference championship game sites to come no later than the league's spring meetings in May.

The ACC Council of Presidents is scheduled to discuss the matter at a meeting during the men's basketball tournament March 7-11 in Brooklyn, New York.

Future championship games in the state of North Carolina remain in limbo because of House Bill 2, a controversial bill that limits the legal protection of the lesbian, gay, bisexual and transgender community. In September, the ACC pulled all its conference championship games from the state for the 2016-17 season. That included the football title game, which moved from Charlotte to Orlando, Florida.

"Certainly by our spring meetings that will be determined in a definitive way," Swofford said in a phone interview. "We won't be in a situation like we were last year -- with September decisions, in terms of our championships going forward -- and in some cases, it may be before our spring meetings."

The ACC's spring meetings will take place May 15-18 in Amelia Island, Florida.

When asked whether a decision could be made at the presidents' meeting next month, Swofford said, "How definitive it will be depends on where things are in the North Carolina legislative process at that point."

The NCAA also removed all championships from North Carolina for the 2016-17 season. It is reviewing whether to award the state future NCAA championship events between 2018 and 2022. Raleigh and Greensboro have submitted proposals to host NCAA men's basketball tournament games during that time frame. The NCAA's decision will come in April.

What happens with future ACC championships is obviously a big topic, but so is a recruiting proposal in front of the NCAA Division I Council and Football Oversight committee. Though Swofford said the league doesn't have a definitive position on the proposal as a whole, the ACC does want one aspect separated into its own item: the addition of a 10th assistant coach for football. The league also is in favor of adding the 10th coach, beginning in the 2018-19 season.

"On the 10th coach issue, our preference would be to separate it out from the whole package and talk about that, and also talk about the noncoaching positions that continue to grow surrounding college football," Swofford said.

"That's a concern of our schools going forward and the discrepancies that are there, where there are no limitations as to those positions and what that means going forward, and a desire to have some controls on that from a competitive balance standpoint."

The topic was discussed in depth during the ACC's winter meetings earlier this month.

"It's challenging, because you're going to end up with situations where people are supportive of part of the package but not every point of it, and then you have to make a decision about whether you are supportive of enough of the big picture that you could live with some aspects of it that you're not comfortable with," Swofford said.

"That varies from program to program. I'm not sure where that will all ultimately end up."

SEC commissioner Greg Sankey has come out against the recruiting reform package. The NCAA Division I Council, which is chaired by Miami athletic director Blake James, is expected to meet in April and decide whether to push the proposal through.