TAMPA, Fla. -- When the 6-foot-7, 282-pound Aaron Judge takes batting practice, it is nearly impossible to look away.Routinely, Judge smashes balls beyond the 408-foot center-field wall at George M. Steinbrenner Field and high up the 35- to 40-foot rectangular... 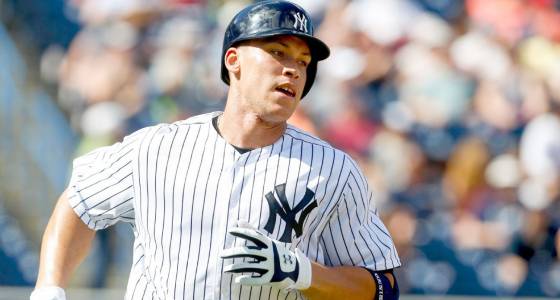 TAMPA, Fla. -- When the 6-foot-7, 282-pound Aaron Judge takes batting practice, it is nearly impossible to look away.

Routinely, Judge smashes balls beyond the 408-foot center-field wall at George M. Steinbrenner Field and high up the 35- to 40-foot rectangular batter's eye behind it. What makes his teammates stop whatever they're doing to catch a glimpse is that when Judge takes a cut, he doesn't look like he's swinging for the fences. His bat smoothly glides through the zone -- and then the ball explodes.

“He is a freak,” New York Yankees third baseman Chase Headley said. “His size and strength, his athletic ability, he has an extreme gift in that sense.”

If Judge can hit for high enough average to go along with 30-plus home run power, it's easy to imagine the Yankees rookie becoming one of the biggest stars in New York.

He also could go down as one of the biggest busts -- yeah, we’re being literal and figurative here -- in Yankees history.

With spring training games underway, Judge’s emergence or disappearance looms over Yankees camp. Judge began the exhibition season in style with a 449-foot homer on Friday, and last August, he made his MLB debut with a Bronx home run, showing the promise that might ignite home crowds for years. He finished his 2016 campaign, however, by striking out in exactly half of his 84 at-bats.

In other words, Judge appears as if he may be an all-or-nothing guy.

With his 25th birthday in April, Judge has a bit of a time limit for showing he is an every-day major leaguer. The Yankees have pitted him against a former top prospect, 27-year-old Aaron Hicks, who didn’t live up to his perceived potential in Minnesota.

The two are dueling for the starting right-field job. In the wings are top outfield prospect Clint Frazier, and two springs away, possibly Bryce Harper.

"He is a freak. His size and strength, his athletic ability, he has an extreme gift ... I was as impressed with him as a person as any player I've been around since I've come up to the big leagues."

For now, it is Judge’s job to lose. Hal Steinbrenner, the team’s owner, has already tipped the organization's scales toward Judge, saying this winter his expectation is for Judge "to be my starting right fielder this year." Still, there's no guarantee, especially after Judge batted just .179 with a .608 OPS in 2016.

Judge is trying to reduce the leg kick in his swing. He said he always plays with it at this time of year, and it especially helps later on to adjust as the wear of the season sets in. He also is refining his routine after watching how regimented players such as Alex Rodriguez and Mark Teixeira were in going about their business.

“I think that is one thing I’ve picked up: follow a routine, be consistent and everything is going to fall in place,” Judge said. “If you are scrambling around and you are late for stuff, that adds extra stress and you have to go out there and hit a 97 mph fastball.

"It is going to be tough. The biggest thing is to get your routine down to a science.”

While Judge's size helps him crush balls in batting practice, it could be a hindrance in the sport. Men of his dimensions don’t usually make it in baseball; few great outfielders have been behemoths. Manager Joe Girardi mentioned Dave Parker and Jose Canseco. Giancarlo Stanton, Jermaine Dye and Dave Winfield come to mind too.

“I think part of it is that you need to be able to cover ground,” Girardi said.

Judge has the “perfect body type almost for a defensive end,” Girardi said. But his brain could be perfect for baseball. Early indications are he has some Jeter-esque traits, like staying positive and in the right frame of mind.

How Aaron Judge fared in his first cup of coffee in the bigs last year -- and how 2017 might go for the 6-foot-7 slugger, according to ZiPS.

“I was as impressed with him as a person as any player I’ve been around since I’ve come up to the big leagues,” said Headley, a veteran of nine-plus years in the big leagues. “In the sense, he really struggled, he really had a tough time, but you never saw him impacted in the mood that he came in, the way he carried himself. You never felt like he was scared going up the plate or that he was afraid to fail. You never saw him get extremely down.

“Generally, I think that bodes well. If you have the ability, generally, the mental side decides if you can or can’t stay. What I saw, I was really impressed.”

Judge also has impressed Yankees general manager Brian Cashman. “He is perfect that way. His work ethic is excellent. His makeup is the type you would like all of them to have," Cashman said. "He has a hunger, a desire and a passion to be the best he can possibly be and go about the business the way you need to go about it as a pro.”

When he speaks, Judge doesn’t sound like a guy with just 27 major league games under his belt.

Aaron Judge is driven. No doubt, he'll have a place in Yankees history. His name will mean something. The fun is finding out what that will be.