Aaron Hernandez leaves us with one final 'Why?'

The text message came in early, around 6:30 a.m. ET, and upon hearing the news that Aaron Hernandez had apparently hanged himself in his prison cell, I immediately thought of his 4-year-old daughter, Avielle. She was right there in Courtroom 906 while her... 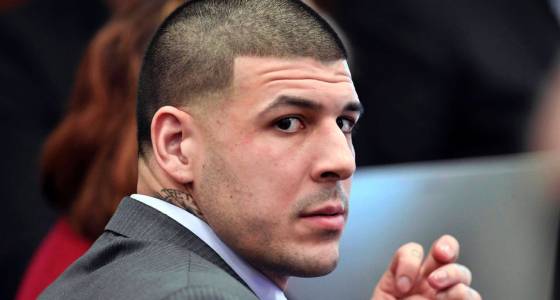 The text message came in early, around 6:30 a.m. ET, and upon hearing the news that Aaron Hernandez had apparently hanged himself in his prison cell, I immediately thought of his 4-year-old daughter, Avielle. She was right there in Courtroom 906 while her dad was being tried for the murder of two men, a case that would end late last week in his acquittal.

I thought about those two men, Daniel de Abreu and Safiro Furtado, and the family members who deserve justice and who sat through an excruciating ordeal for weeks, listening to detailed testimony about the bloody and senseless deaths of their loved ones.

I thought of the family of Odin Lloyd, the semi-pro linebacker who in 2013 was found dead in a gravel pit about a mile from Hernandez's North Attleborough, Massachusetts, home. Lloyd's mother, Ursula Ward, showed remarkable courage and grace after the former New England Patriots tight end was found guilty of executing her son.

Aaron Hernandez, who was serving a life sentence for a murder conviction and just days ago was acquitted of double murder, died after hanging himself in his prison cell Wednesday morning.

Originally published in 2013, Elizabeth Merrill reports how Odin Lloyd's relationship with Aaron Hernandez had given Lloyd a glimpse of the life he'd dreamed of.

"I forgive the hands of the people that had a hand in my son's murder, either before or after," Ward said after the verdict came down. "And I pray and hope that someday everyone out there will forgive them also."

I also thought of D.J. Hernandez, Aaron's older brother and a football coach at a Connecticut high school. When Aaron was 16, he was broken in half by the death of his father, Dennis, a legendary schoolboy athlete in Bristol, Connecticut, who died of complications from hernia surgery. By all accounts, despite the tragedy, D.J. has lived the productive life that eluded his kid brother.

But as much as anything, I thought of the surreal scenes that had played out inside Boston's Suffolk Superior Court.

Aaron Hernandez joked regularly with the attorneys there to defend him, and interacted easily with the corrections and court officers there to guard him. He tried to make an eye-contact connection with the seven women and five men there to judge him, too. He mouthed words of love and support to his fiancée, and he blew a kiss to Avielle. I watched him closely for a couple of days inside the courtroom, and on and off throughout the trial on live-stream video. I kept trying to picture him pumping bullets into his dying friend Lloyd, and it was a very hard place to get to.

The same holds true of the image of Hernandez tying a bed sheet to his window inside the Souza-Baranowski Correctional Center in Shirley, Massachusetts, early Wednesday morning and hanging himself. He'd just been found not guilty of the 2012 murders of de Abreu and Furtado, and he'd been told by his lead attorney, Jose Baez, that there was a chance to overturn the Lloyd conviction on appeal.

The former tight end nodded and wept after the jury foreperson read the verdicts of not guilty, and suddenly a man serving a life sentence behind bars had something new to live for.

"I think there are plenty of flaws in that [Lloyd] conviction," Baez had told ESPN.com. "If they are exposed properly, [Hernandez] certainly can and should get a new trial."

The prospect of a new trial, Baez said, brought into play what had been an unfathomable scenario -- his client someday walking out of prison a free man. Aaron Hernandez, the attorney said, was "one step closer to being reunited with his family."

"The family and legal team is shocked and surprised at the news of Aaron's death," Baez said in a statement released Wednesday morning. "There were no conversations or correspondence from Aaron to his family or legal team that would have indicated anything like this was possible. Aaron was looking forward to an opportunity for a second chance to prove his innocence. Those who love and care about him are heartbroken and determined to find the truth surrounding his untimely death."

Baez called on authorities to conduct a transparent investigation, and he said his law firm would conduct one of its own.

The news of Hernandez's death hit as hard as the news of his arrest in 2013. He caused a lot of trouble at the University of Florida, through drug use and reckless behavior, causing him to plunge to the 113th overall pick in the 2010 draft. Over time, the Patriots franchise grew increasingly concerned about the hometown criminals Hernandez was associating with; the tight end reportedly told coach Bill Belichick at the 2013 draft combine that he feared for his life.

Four months later, the cops showed up at Hernandez's mansion and cuffed the tight end behind his back, charging him with Lloyd's murder.

Five days after Baez said there was a chance of overturning that conviction, the same day the champion Patriots would be honored at the White House, Hernandez was found unresponsive in his prison cell. He was taken to UMass Memorial-HealthAlliance Hospital in Leominster and pronounced dead at 4:07 a.m. He died with a tattoo on his hand that read "CBS/WBS/IWBTG," which was said to represent the words "can't be stopped, won't be stopped, I will be the greatest."

Suicide is too complex to fit neatly inside a small box, and Hernandez leaves behind so many questions and so few answers. Why now? Why would he kill himself after winning an acquittal in the double homicide? Was he heartbroken over the fact he still couldn't be the day-to-day father his daughter needed him to be?

This much is clear: In his final days, even as a convicted murderer, Aaron Hernandez didn't come across as haunted. He actually looked like a guy who had a little something to live for.