CARACAS, Venezuela — For a Venezuelan skier who had only trained on wheels beneath a bright sun, the slopes of Finland proved a mighty challenge.Adrian Solano wobbled nervously backward as he exited the starting gate at the Lahti2017 FIS Nordic World Ski... 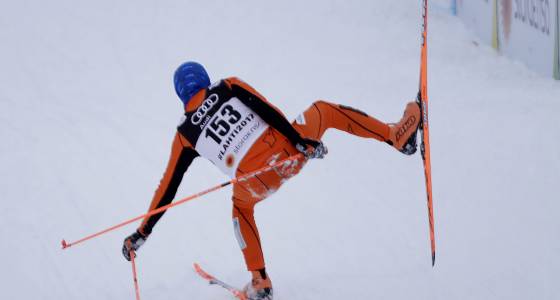 CARACAS, Venezuela — For a Venezuelan skier who had only trained on wheels beneath a bright sun, the slopes of Finland proved a mighty challenge.

Adrian Solano wobbled nervously backward as he exited the starting gate at the Lahti2017 FIS Nordic World Ski Championships this week. He fumbled into the white powder after sliding down a small hill. And he tried awkwardly walking up an incline while others raced by him.

By Thursday, sports commentators circulating videos of his comedic cross-country performance online had dubbed him the worst skier alive.

Solano, however, teetered along, unfazed.

“From here to the Olympics!” he proclaimed in an interview with Norwegian tabloid Dagbladet.

Solano’s saga has hit a nerve among Venezuelans and angered the country’s highest officials, who are denouncing France for deporting the athlete in January while he was trying to get to Sweden to train on snow. Airport migration officials in Paris allegedly doubted his story, thinking his journey to the slopes was a ploy to leave his beleaguered country.

“We will issue a strong statement to the French government for their affront against a Venezuelan athlete,” Venezuela’s foreign minister, Delcy Rodriguez, wrote in a tweet Wednesday.

Stuck back in Caracas, Solano’s supporters started a GoFundMe page that brought him to Finland just in time to compete.

The only problem: He hadn’t practiced skiing on snow, only on wheels in Venezuela’s scorching heat.

In the first race, a 10-kilometer qualifying round, Solano failed to finish. He completed the first 3.5 kilometers in 37 minutes and 39 seconds — the same amount of time it took other competitors to finish the entire course. In the 1.6 kilometer cross-country sprint he finished last in 156th place.

“Embarrassing!” wrote one critic on his Instagram page, who went on to accuse him of receiving sponsorship from the Venezuelan government while countless go hungry.

“My friend,” he wrote in response, “I swear I am not here because of the government. I arrived thanks to people who heard my story and supported me.”

Still, many others are rallying to support Solano and his dream of one day waving the Venezuelan flag in the winter Olympics.

“I achieved a dream,” he said in his interview with the Norwegian newspaper. “This pushes me to try more every day.”

Our editors found Safirbet this article on this site using Google and regenerated it for our readers.