Rev. John Talamo knew he “struck gold” before his players took their first march from the school’s locker room, up the hill and onto the field for their first football game. It was 1999 and enrollment at Don Bosco Prep was plummeting while... 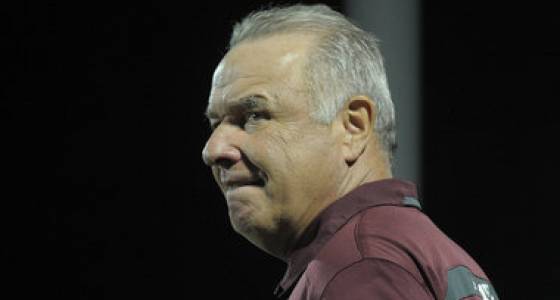 Rev. John Talamo knew he “struck gold” before his players took their first march from the school’s locker room, up the hill and onto the field for their first football game.

It was 1999 and enrollment at Don Bosco Prep was plummeting while the school’s debt was mounting.

What unfolded next for Talamo was a pre-game ritual that would be carried out for the next 17 years and rare insight into the inner-workings of the most important hire of his five-year tenure as principal at the Ramsey school.

At “The Grotto” -- the centerpiece of Don Bosco’s campus featuring a 20-foot shrine of the Virgin Mary next to a picturesque pond -- coach Greg Toal spilled his guts to his players.

He opened up. The school’s hard-nosed football coach followed Talamo’s prayer with what would be the first of many heart-felt addresses that helped Toal build his reputation as an all-time great motivator for thousands of athletes.

“So not only did we see a tough guy on the outside, but we saw a human being from the inside. It was a beautiful experience and amazing to witness. He was not only a man of great faith, who was loyal and had a great vision, but he was also a man with an incredible heart and big faith.”

By the time Talamo left in 2002, Don Bosco was on its way. Toal won his first of nine state championships that season and finished No. 1 in the state - a monumental achievement for a team that was routinely being blown out by rivals St. Joseph (Mont.) and Bergen Catholic.

The first state title was a part of a four-year build for Toal and the Ironmen, who in year one finished 7-4 and had just 25 players.

“When he took over, the parents were up in arms because they didn’t buy into his philosophy right away,” Talamo said. “Most of the kids quit the team. They were still extremely competitive, but we didn’t win states. Then all of a sudden when they started seeing the success and buying into this philosophy, that’s when it just propelled forward, but we had a rough start, we really did.”

The story of that rough start began with a shot in the dark. Talamo knew he needed a coach to bring the school’s athletic appeal to a national level. The school was well-regarded for its academics but needed Toal to “galvanize” the athletic end.

He did just that. Toal took the Ironmen across the country playing De La Salle and Mission Viejo from California, St. Thomas Aquinas in Florida, St. Igantius from Ohio and Prattville from Alabama. Toal and the Ironmen challenged them and beat them, too.

In 17 years, Toal’s teams finished 26-8 against out-of-state competition. There were two mythical national championships along the way.

In the spring of 1998, Talamo knew he needed Toal to help save the school. How did he find him?

Talamo said he asked every single person he could, including his mailman, who the best coach in the state was. The answers unanimously pointed at Toal, who had turned Saddle Brook, River Dell and Hackensack into perennial winners.

Toal was set to take over as the head coach at Clifton, but Talamo wanted Toal to hear his pitch anyway. The two toured the Don Bosco campus and by the end of their conversation, Toal was on his way to his first coaching stint at a non-public school.

“He was hesitant...very hesitant,” Talamo said. “I was able to share with him my vision and before the end of the meeting, we pretty much came to the conclusion that this would be a good fit for the two of us. The day after that, we made it work.”

“You’re not going to find a more loyal human being,” Talamo said. “That man loved those kids. He wasn’t just their coach, he became their mentor, and that’s the difference I believe with Greg Toal from another coach. That’s the key to his success. The boys trust him. He earns their trust, and he maintains their trust."

More than a decade removed from his first priestly assignment at Don Bosco, Talamo is back home in his native Louisiana working at St. Andrew The Apostle Roman Catholic Church in New Orleans.

Talamo said he’s been following the story of Toal’s separation from Don Bosco from afar but “is not familiar with what happened at the end.”

He still remembers the moment at the Grotto when his vision became a reality.

“It’s sad how it came abruptly to an end but God has big plans for Coach Toal," Talamo said. "I’m sure He’ll see him and his family through this little dark period in his life.”