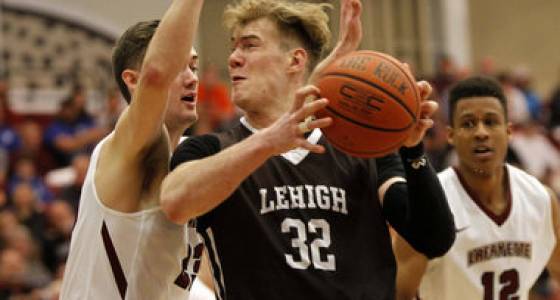 A trio from Lehigh University and a duo from Lafayette College earned Patriot League men's basketball honors on Monday.

Kempton was snubbed of a third straight Patriot League Player of the Year award as the honor instead went to Bucknell junior center Nana Foulland, as did Defensive Player of the Year. Foulland joins former Bison Mike Muscala as the only player in league history to win both awards in the same season.

One of only two players in the country to average more than 20 points and 10 rebounds per game, Kempton had earned the top honor in 2015 and 2016 but missed out this season despite leading the league in scoring (20 ppg) and rebounding (10.1 rpg). For the regular-season champion Bison, Foulland averaged 14.8 points per game, 7.9 rebounds per game and a league-leading 1.9 blocks per game.

The league tournament is set to tip off Tuesday as Lafayette travels to Loyola for the opening round while Lehigh has a bye before taking on Colgate Thursday at Stabler Arena.