This would be a shocker.  In their latest 2017 NFL Mock Draft, Bleacher Report projects the Eagles will be taking Jabrill Peppers at No. 15 overall, much higher than the Michigan prospect -- and East Orange native -- is projected to go.  Bleacher... 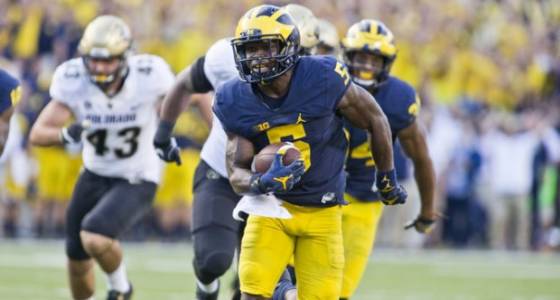 This would be a shocker.

In their latest 2017 NFL Mock Draft, Bleacher Report projects the Eagles will be taking Jabrill Peppers at No. 15 overall, much higher than the Michigan prospect -- and East Orange native -- is projected to go.

Bleacher Report also has Peppers listed as a linebacker, despite the fact a large portion of scouts project Peppers to play in the secondary. It also makes the fact they project the Eagles would take Peppers even more confusing.

Peppers, 6-foot-0, 205 pounds, was one of the most versatile players in college football last season, finishing with 119 tackles, 3 sacks and one interception on defense, and 239 yards rushing on offense

Although his versatile game is appealing, it also means in the NFL, teams will have to figure out what position he best fits.

On the Eagles, Peppers best fit would be at cornerback, as they have two starting safeties and badly need help at cornerback. While take Peppers at No. 15 to play cornerback would be a reach, as there are better cornerbacks available, it would at least be an attempt to fill a need.

Taking him at linebacker, however, would be very confusing.

Although the Eagles do need a new outside linebacker, with Mychal Kendricks likely to be released or traded, drafting Peppers at No. 15 overall to play linebacker would have to be considered both a reach and massive risk. Peppers is also undersized to play linebacker.

It is also worth noting that in Bleacher Report's mock draft, the Eagles pass on Florida State running back Dalvin Cook, who they project will go No. 16 overall to the Baltimore Ravens.

Here is more on Peppers, via CBS Sports:

STRENGTHS: Peppers possesses a compact, muscular frame and the easy athleticism that translates well to the NFL. Peppers is one of the most instinctive players in the country, showing terrific awareness and the closing speed to take full advantage of his awareness. He accelerates quickly, showing the quick-twitch burst to flash through gaps and close on ballcarriers and easily changes directions, possessing loose hips, greasy knees and flexible ankles to elude would-be blockers or defenders attempting to tackle him, alike. Peppers' agility and acceleration help him remain in the hip pocket of receivers, helping him project well to safety or even cornerback at the next level, should that be the need of his future NFL team. Despite his lack of ideal size for playing near the line of scrimmage, Peppers is a highly competitive and surprisingly physical defender, unselfishly taking on blockers to push ballcarriers toward the cavalry.

WEAKNESSES: Will be viewed by some as a tweener, lacking the bulk to remain close to the line of scrimmage, and has limited experience playing deep in coverage. He is surprisingly strong but is often reliant upon avoiding rather than taking on blocks and is knocked to the ground too often, struggling to recover when knocked off-balance. He is hyper-aggressive in pursuit, attacking the ball with such fervor that he leaves cutback lanes for savvy ballcarriers to exploit. This issue is exacerbated by Peppers' lack of ideal length, leaving him grasping at air as runners hesitate and let him run by. Despite his reputation as a playmaker, Peppers recorded just one interception (and one forced fumble) during his college career.