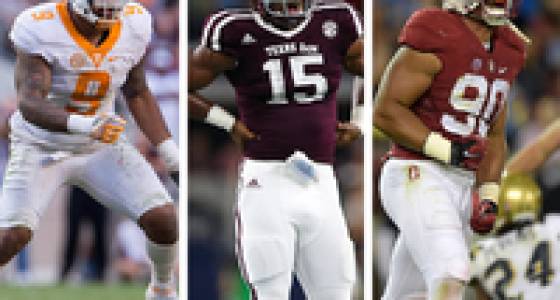 With the 2017 NFL Scouting Combine upon us, Bucky Brooks is ranking the top prospects at key positions. Today's focus: pass rusher.

Strengths: Dynamic pass rusher with cat-like quickness and a non-stop motor. Garrett overwhelms offensive tackles with his unique combination of speed, quickness and power. He can turn the corner with a slippery dip-and-rip maneuver or attack blockers squarely with a butt-and-jerk move. Garrett's high-revving motor and relentless energy allow him to win after initially being neutralized at the line. With pass rushers coveted at a premium on draft day, and given Garrett's explosiveness, hand skills and takedown prowess, the Texas A&M product is widely considered the No. 1 overall prospect in this draft class.

Weaknesses: Despite his rare set of skills as a pass rusher, Garrett disappeared in some games last season. Now, some of his struggles could be attributed to a nagging ankle injury that limited his overall effectiveness. But some scouts wonder if his game actually matches the hype. Although he has clearly flashed disruptive potential off the edge, Garrett must do a better job of closing out games as the designated pass rusher.

Strengths: High-motor pass rusher with freakish athleticism and violent hands. Thomas has the tools to emerge as the most destructive defender in this draft. From his ability to harass the quarterback off the edge using his speed and quickness to his superb hand placement and skill, Thomas can throw a variety of pitches at offensive tackles to keep them on their heels. In addition, he understands how to jump the snap and flashes terrific first-step quickness off the ball. Having established himself as an inside/outside rusher (defensive tackle/defensive end) at Stanford, Thomas offers the versatility to be an inside defender on nickel downs in the NFL. Given his explosive athleticism, well-rounded game and polished technical skills, Thomas could be a difference maker for a team on Day 1.

Weaknesses: Scouts love Thomas' athleticism, motor and competitiveness, but there are some concerns about his size. At 6-foot-3, 273 pounds, he might be a little light to play inside as a 5-technique in a 3-4 scheme. In addition, there will be some concerns about his best fit (defensive end or defensive tackle) in a 4-3 system despite his athleticism and pass-rushing prowess. Considering his status as a tweener, Thomas could see his stock dip a bit on draft day.

Strengths: Highly productive SEC player with exceptional hand skills and pass-rushing techniques. Barnett is the most pro-ready guy on this list. The Tennessee product possesses karate-like hand skills and superb snap-count anticipation. As one of the few pass rushers in the 2017 class with the capacity to win with finesse or power off the edge, Barnett is a problem for offensive tackles incapable of handling his martial-arts assault. Not to mention, he displays a non-stop motor that allows him to rack up sacks on "hustle and flow" plays from the backside. While some skeptics will question his athleticism, it is hard to knock his consistent dominance and production in a conference viewed as the hotbed for NFL talent.

Weaknesses: Scouts view Barnett as a better player than athlete. They expect him to post pedestrian numbers at the NFL Scouting Combine and suggest his lack of explosiveness will show up on the NFL stage. Although it isn't mandatory to be a super athlete on Sundays, the margin for error is slimmer for a guy without elite athletic traits.

Strengths: Relentless pass rusher with explosive athleticism and first-step quickness. McKinley might have the best get-off in the draft -- his ability to jump the snap is problematic for offensive tackles with slow kick-steps. The former Bruin races around the edge like a roadrunner to nail quarterbacks in the pocket. With his wiggle, burst and non-stop motor, McKinley completely destroys the timing of the passing game and his disruptive potential could force opponents to game plan around him. His combination of energy, athleticism and skill could make him a consistent double-digit-sack producer early in his career.

Weaknesses: McKinley has terrific athleticism and movement skills, but lacks polished hand skills and technique. He needs to add a few more moves to his arsenal to complement his speed rush and dip-and-rip maneuver. Although he has been able to get by with his sheer athleticism, McKinley will need a more refined game to dominate the NFL as a designated pass rusher.

Strengths: Blue-collar pass rusher with a workmanlike game built on grit, toughness, and effort. Harris outworks blockers at the line of scrimmage, exhibiting a nice combination of athleticism and technique to win with a variety of moves. From a violent spin move to a powerful bull rush to a slick dip-and-rip technique, the Missouri product throws a barrage of pitches at offensive tackles until they strike out. In addition, Harris displays a non-stop motor that overwhelms most blockers over the course of a 60-minute game. He is an excellent run-and-chase defender adept at tracking down quarterbacks from the back side. Harris' old-school game lacks sizzle, but it's built on a foundation that should allow him to sustain his production as a pro.

Weaknesses: Despite showing sinewy strength as a run defender, Harris can be engulfed by big offensive tackles on the edge. He gets pushed around a bit at the point of attack and is slow to disengage when he gets locked up. Although Harris flashes solid hand skills as a pass rusher, he needs to refine his combat skills as a run defender to be an effective three-down player.