With the 2017 NFL Scouting Combine upon us, Bucky Brooks is ranking the top prospects at key positions. Today's focus: defensive back.Pro comparison: Landon Collins.Strengths: High-energy defender with an alpha-dog mentality and a versatile set of skills.... 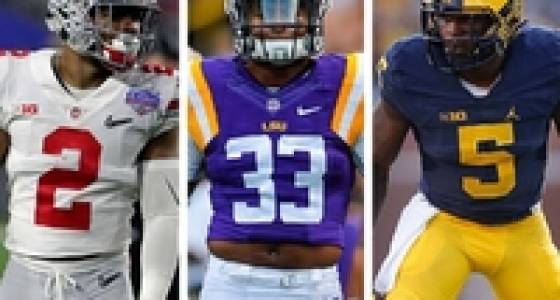 With the 2017 NFL Scouting Combine upon us, Bucky Brooks is ranking the top prospects at key positions. Today's focus: defensive back.

Strengths: High-energy defender with an alpha-dog mentality and a versatile set of skills. Adams is a dynamic safety capable of playing in the box or roving as a center fielder between the hashes. At his best, he's an action hero capable of making splash plays all over the field as a sideline-to-sideline defender. Whether it is nailing a running back in the hole or blanketing a slot receiver/tight end in coverage, Adams is always around the action. In coverage, he flashes enough athleticism to hold up in man, while also displaying the instincts, awareness and ball skills to thrive as a deep-middle playmaker in zone. Considering Adams' superb communication ability and leadership skills, it is easy to envision the LSU standout becoming the new prototype at the position early in his career.

Weaknesses: Adams' ultra-aggressive demeanor could make him susceptible to double moves and misdirection plays as a deep-middle defender. He is so eager to get in on tackles that he might abandon his post when he misreads backfield action. Although it rarely shows up on tape, savvy offensive coordinators will test Adams' discipline with full-flow play-action fakes to lure him out of position.

Strengths: Ball-hawking safety with superb instincts, awareness and ball skills. Hooker is an aggressive center fielder with extraordinary route-recognition skills and anticipation. In coverage, he displays outstanding footwork and movement skills roaming the deep middle in man or zone coverage. Hooker excels at "stealing second base" off of the quarterback (early jump on the throw) with his anticipation skills. He complements his quick reactions with strong hands and natural ball skills. Hooker rarely drops a potential interception within his zip code, which makes him a huge asset for a ball-hungry defense. Against the run, Hooker is a willing tackler on the perimeter, though not necessarily a big hitter. Overall, Hooker is a spectacular ballhawk with the kind of instincts and ball skills that should make him a legitimate all-star at the next level.

Weaknesses: For all of Hooker's strengths as a pass defender, he needs to be a more impactful run defender. The Ohio State standout misses too many tackles as the last line of defense due to his chop-down tackling style. Hooker's lack of high-level experience also could be an issue at the next level. He only started one year at Ohio State and could need more seasoning before reaching expectations as a blue-chip prospect.

Strengths: Smooth cover corner with excellent movement skills and a versatile game. Lattimore is a scheme-friendly CB capable of playing in any system while using a wide variety of techniques. He is a prototypical CB1 with the capacity to use bump-and-run, bail or off techniques to blanket WR1s on the perimeter. In addition to his superb one-on-one skills, Lattimore flashes impressive instincts, awareness and ball skills in zone coverage. He shows a great mastery of route recognition, which places him well ahead of most cover corners at this stage of their development. Considering his exceptional athleticism, movement skills and plug-and-play game, Lattimore is a top-10 talent in any draft.

Weaknesses: Despite his exceptional cover skills, there are still some concerns about Lattimore's ability to thrive as a CB1 due to his slender build and finesse game. He doesn't appear to love contact on the perimeter and opponents could expose his lack of physicality with big-bodied receivers. In addition, Lattimore's hesitancy could weaken a team's run defense if he refuses to be an active tackler on the edge. He must show more physicality and toughness to be viewed as a complete player at the position. A lingering history of hamstring injuries leads to questions about his durability. Also, he only started one full season at Ohio State. Thus, Lattimore might be an iffy proposition for some teams.

Strengths: Polished cover corner with outstanding movement skills, instincts and ball reactions. Jones is a pro-ready playmaker capable of playing in any scheme while employing a variety of techniques to neutralize WR1s. He is one of the few corners in the draft proficient at using bump-and-run, off and bail technique on the island. In fact, Jones already shows a mastery of certain techniques that exceed the capability of some established Pro Bowl players at the position. With Jones also flashing a nasty temperament and a love of contact, the Washington star is the most complete prospect at the position. As a CB1 with all of the tools in the tool box, he should be a difference maker on Day 1.

Weaknesses: Jones' slender build will lead to some concerns about his strength on the island. He gets knocked around a bit by physical receivers and lacks the girth to hold his ground. Although the size/strength deficiency didn't show up much on tape, it could be a sticking point for teams playing in divisions with big-bodied WR1s.

Strengths: Versatile second-level defender with explosive athletics traits. Peppers is a Swiss Army Knife capable of playing any skill position on offense or defense. At various times last season, he aligned in as many as nine different positions (safety, nickel, linebacker, cornerback, Wildcat QB, running back, wide receiver, kick returner, punt returner) for the Wolverines. As a defender, Peppers is an instinctive playmaker who's all over the field. Whether it is making tackles behind the line of scrimmage as a run-and-chase player or slipping past blockers on blitzes or covering tight ends/slot receivers downfield, Peppers is the ultimate utility man on defense. In coverage, he exhibits versatility and skill matching up with receivers and tight ends in space. He plays well in space (off coverage) and has a nice feel for using his help in coverage (plays with outside leverage to force receivers to the cutter in the middle of the field). Peppers shows electric skills with the ball in his hands. He is shifty and explosive in the open field, yet he also displays above-average strength running through arm tackles. With his skills as a playmaker translating into big plays in the kicking game, Peppers could thrive as a rare three-way player in the league.

Weaknesses: Peppers' lack of ball skills in coverage has been cited as the biggest flaw in his game. He only registered one interception and 10 pass breakups during his college career. While some of this underwhelming production is due to playing a lot of man coverage (defenders typically snag fewer interceptions due to eyes being locked on their assigned man instead of keeping vision on the quarterback), Peppers didn't get his hands on enough balls to be considered a ballhawk at the position.