Ron Wyden wanted to keep the meeting going. More than 3,000 people gathered at the David Douglas High School gym on Saturday in a standing-room only town hall meeting to hear the U.S. senator's thoughts on the Affordable Care Act, Supreme Court nominee Neil... 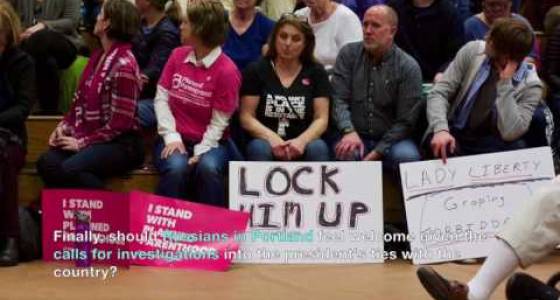 More than 3,000 people gathered at the David Douglas High School gym on Saturday in a standing-room only town hall meeting to hear the U.S. senator's thoughts on the Affordable Care Act, Supreme Court nominee Neil Gorsuch and potential ties between President Donald Trump and the Russian government.

But the basketball needed the floor.

It was the last stop of Wyden's eight-day, 11 city tour before he was due back in Washington, D.C. after the 115th Congress' first recess.

Anyone who attended his meeting in Oregon City on Feb. 18, or any other such gatherings over the next week, would have recognized some of the senator's anecdotes and rallying cries.

He went to college on a basketball scholarship. But, he says, "I was too short and I made up for it by being slow."

On Republicans' cries to repeal or amend Obamacare: "You wanna drop the partisan stuff, we'll talk."

Wyden's final town hall before the end of the Congressional recess came just as reports had begun to surface that the Trump administration had pressed legislators and intelligence officials to dispute stories about the president's alleged connections with Russia.

He said the reports were "troubling," calling into question how the intelligence committee could work autonomously should these allegations be true.

"As a general rule there is supposed to be a firewall between an investigative committee and the administration during a period like this," the senator told reporters during a scrum after the town hall meeting.

Wyden again insisted that he would suggest a special prosecutor look into the Trump campaign team's ties with Kremlin. He once again called for Attorney General Jeff Sessions to recuse himself from the investigation.

The senator also called for his colleagues on Capitol Hill to amend the Affordable Care Act instead of repealing it and to maintain popular pieces of the legislature such as its requirement that insurance companies accept new enrollees with pre-existing conditions.

"We are not going back to the days when healthcare was only for the healthy and the wealthy," Wyden said to cheers and applause.

At Douglas High, much like other town hall meetings across the country in recent weeks, attendees collectively waved sheets of paper that read "agree" or "disagree" in bold letters after many of Wyden's proclamations.

One audience query in particular had much of the crowd on its feet -- clapping, stomping and hooting while Wyden waited for the dust to settle. The question: What does Trump have to do for senators to begin impeachment proceedings?

Wyden took the opportunity to tell the crowd that Articles of Impeachment can only be enacted by the House of Representatives. After the short civics lesson, it was on to one of the looming decisions in the Senate.

Another attendee asked Wyden if he would filibuster the confirmation of Neil Gorsuch, Trump's pick to replace Supreme Court Justice Antonin Scalia.

When the senator said he would require 60 votes to confirm, the audience grew restless.

"Answer the question," several shouted as Wyden said he would use every tool at his disposal to block the nominee.

"He's going to be treated a lot better than the way (Obama pick) Merrick Garland was treated," the senator said.

Throughout the town hall meeting, Wyden told the crowd how heartened he was to see representative democracy in action.

"This is vintage Oregon right here," he said.

At several points, the senator repeated what he said would make for successful civic engagement. Although much of the audience was in support of what Wyden and Sen. Jeff Merkley lobbied for on Capitol Hill, there were still ways to influence representatives from other states, he said.

Wyden suggested attendees call their friends in traditionally red districts. He told the audience to urge people they know to contact their representatives and to push for policies that positively impact everyone.

It's what Wyden calls "The Oregon Way."

In the interview, live-streamed from the Skype Live Studio, Wyden said he will do everything in his power to thoroughly investigate Trump's ties to Russia and Michael Flynn's contact with the country.

"This is so important and I am not going to let it get swept under the rug," he said.

Wyden said it was "absolutely essential" that Flynn be called to testify under oath in an intelligence hearing.

"Unless Michael Flynn walks in to the Intelligence Committee, in an open intelligence hearing... and tells the county what in the heck is going on here, a lot of people will doubt that this is a credible inquiry," he said.