A new form of protest against President Donald Trump took shape midnight Friday when witches around the country gathered to cast a spell to remove him from office. Christian conservatives are outraged and accused the witches of "declaring spiritual... 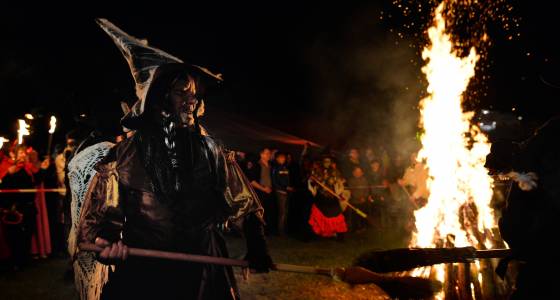 A new form of protest against President Donald Trump took shape midnight Friday when witches around the country gathered to cast a spell to remove him from office. Christian conservatives are outraged and accused the witches of "declaring spiritual war," according to New York Post.

The people behind it reportedly created a Facebook page and used the hashtag #magicresistance. There were over 12,000 likes for the page at the time of publishing.

Joshua Feuerstein, an evangelical pastor, issued an "urgent warning" and said that millions of people were trying to curse the president. "Their bippity-boppity-boo isn't more powerful than the name of Jesus!" he said, according to BBC.

A conservative religious group called the Christian Nationalist Alliance called Feb. 24 a "day of prayer" in order to combat what the witches were performing. It called the witches "oculists" and said they were summoning dark spirits against Trump. Every time the witches performed spells, the group said it would ask people to pray so that nothing unholy happens.

The witches have promised to cast the same spell every time there's a crescent moon until Trump leaves office. The next dates for the crescent moon are March 26, April 24 and May 23, June 21, July 21, Aug. 19 and so on.

Writer Michael Hughes, who organized the mass spell Friday, is said to have posted the spell online on Extra NewsFeed and reportedly asked people to perform it.

What you need to know the about the spell:

According to Hughes' document, the ingredients of the spell include:

Hughes wrote in the document: "The threat from Trump and his cabal is enormous, not just to individuals, but to the collective body and spirit. Be bold! Say the words with ferocious intensity and feel them!"

According to the instructions on how to perform the spell, the name "Donald J. Trump" needs to be inscribed on the orange candle with a nail or pin, other items to be arranged in a circle and then the ones casting the spell should recite 23rd Psalm aloud.

This is to be followed by lighting a white candle and the spell itself. Practitioners are then asked to burn Trump's photo with the light of the orange candle while "passionately" chanting, "So mote it be!" Finally, at the end of the ritual, practitioners are to "blow out orange candle, visualizing Trump blowing apart into dust or ash."

Besides the common people, singer Lana Del Rey joined the event and supported it.