WASHINGTON — From her seat among Washington, D.C., dignitaries on Tuesday night, Carryn Owens fought back tears. Grief visible in her face, the widow of William "Ryan" Owens, a Navy SEAL killed less than a month ago in the Trump administration's... 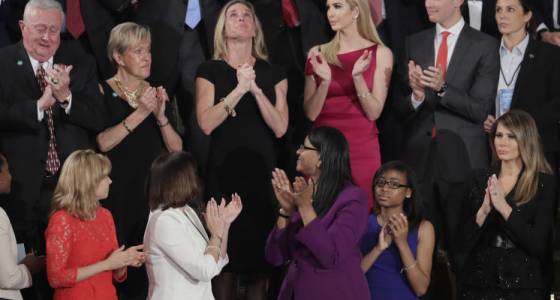 WASHINGTON — From her seat among Washington, D.C., dignitaries on Tuesday night, Carryn Owens fought back tears. Grief visible in her face, the widow of William "Ryan" Owens, a Navy SEAL killed less than a month ago in the Trump administration's first counterterrorism operation, wore a strained smile and applauded as President Donald Trump paid an extended tribute to her husband.

"Ryan died as he lived: a warrior, and a hero, battling against terrorism and securing our nation," Trump said, making reference to the Jan. 29 raid on an al-Qaida stronghold in central Yemen that resulted in Ryan Owens' death.

But the raid, the first overseas operation approved in the Trump presidency, triggered a sustained storm of criticism. Numerous elements of the operation went wrong, resulting in not only Owens' death but also a score of likely civilian casualties and the destruction of a $75 million aircraft. To many national security experts, the new administration's handling of the operation reflected a lack of proper caution and consideration.

The raid also caused a possible risk with the Yemeni government, an ally against al-Qaida in the Arabian Peninsula and in the broader civil conflict that has pushed Yemen into a severe humanitarian crisis.

According to the White House, Trump spoke with Carryn Owens after the raid, which occurred eight days after Trump took office and marked a significant escalation in U.S. military activities in Yemen.

But Owens' father, Bill Owens, refused to meet with Trump at Dover Air Force Base earlier this month, where family members had gathered to receive Owens' remains. The elder Owens questioned the necessity and the timing of the operation and demanded a full investigation.

U.S. military officials have maintained it was a successful raid that provided valuable insight into one of the world's most potent militant groups. They are conducting several probes into the operation.

Even as he highlights the sacrifice of Ryan Owens, Trump in recent days has appeared to place responsibility for the raid, which may have killed a score of women and children, on his top military officials, saying in an interview broadcast on Tuesday that the generals "lost Ryan."

Again on Tuesday night, Trump appeared to assign ownership of the raid to his defense secretary, James Mattis. Trump said he had spoken to Mattis, who told him the operation "generated large amounts of vital intelligence."

While Trump has promised to give the military greater rein to conduct operations, the remarks are striking from a commander-in-chief, who has ultimate control over military options.

Straying from his prepared remarks, Trump directly addressed Carryn Owens, who was seated in the audience next to his daughter, Ivanka Trump. The president said Ryan Owens was probably "looking down" with pride because he had broken "records" — an apparent reference to the applause the focus on the fallen SEAL brought from lawmakers and other officials gathered around them.