No surprise here: Far-right conservatives are fully behind President Donald Trump. A poll of the 1,447 attendees at the Conservative Political Action Conference, an annual meeting of conservative activists and elected officials, showed the majority approved... 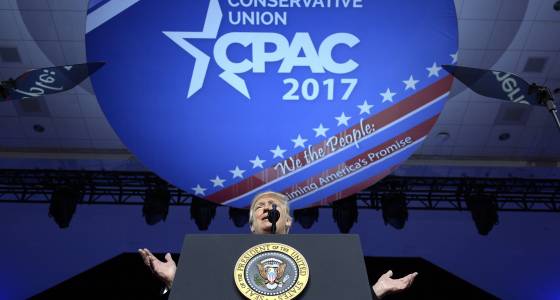 No surprise here: Far-right conservatives are fully behind President Donald Trump. A poll of the 1,447 attendees at the Conservative Political Action Conference, an annual meeting of conservative activists and elected officials, showed the majority approved of Trump's first two months in office.

Trump spoke to the largely supportive crowd Friday in National Harbor, Maryland. Eighty-six percent of those polled approved of Trump’s job so far as president, according to the Washington Times/CPAC poll released Saturday. Fifty-six percent of those respondents strongly approved, while 31 percent somewhat approved and only 12 percent disapproved.

The poll showed that the majority of respondents approved of Trump’s specific decisions and orders. Ninety-four percent said they approved of Trump’s pick for the Supreme Court, Neil Gorsuch. Of the president’s executive order temporarily suspending immigration from seven countries and halting the current refugee program, 81 percent approved.

Seventy percent of respondents approved of Trump’s use of Twitter as president and 90 percent said Trump was “realigning the conservative movement.” Regarding the current state of America, however, respondents were largely split: 44 percent said America was heading in the right direction, while 47 percent said it was headed in the wrong direction.

Trump’s appearance at CPAC Friday was his fifth, but his first as president of the United States. During his speech, he focused mainly on the media, specifically targeting “fake news” and the use of anonymous sources.

“In fact, in covering my comments, the dishonest media did not explain that I called the fake news the enemy of the people,” he said. “The fake news. They dropped off the word “fake.” And all of a sudden the story became the media is the enemy.”

Trump still has his critics in the Republican Party, however. Most notably among his denouncers are Arizona Sen. John McCain and South Carolina Sen. Lindsey Graham, both of whom have vocally opposed the president.