California — meaning you, me and our elected officials — are to blame for the murder of Whittier Police Officer Keith Boyer. Not entirely to blame. We didn’t pull the trigger. But we helped put the killer out on the street and then we... 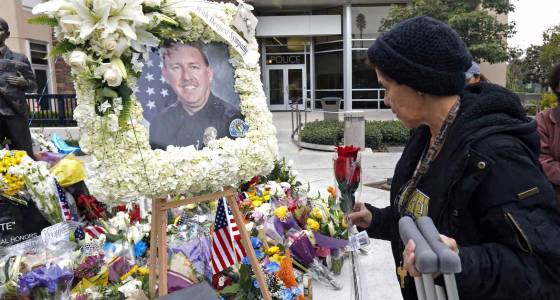 California — meaning you, me and our elected officials — are to blame for the murder of Whittier Police Officer Keith Boyer. Not entirely to blame. We didn’t pull the trigger. But we helped put the killer out on the street and then we let him run wild.

As a former federal prosecutor and criminal law professor, I find the facts of the case as heartbreaking as they are familiar:

On Feb. 20, 2017, Officer Boyer was shot to death during what some in the press still call a routine traffic stop, as if such a thing exists.

The suspect, a convicted felon and career criminal, Michael Christopher Mejia, first shot and killed his cousin, then stole a car, before the confrontation that led to Boyer’s death and the wounding of Boyer’s partner.

Just one week before, Mejia was let out of Los Angeles County Jail.

Not state prison, mind you, where Mejia should have been serving his most recent felony convictions, but local jail, the traditional home of misdemeanants, those awaiting trial, and non-violent criminals.

L.A. County Jail officials knew Mejia’s criminal record. They also knew or should have known he was a notorious gang member. According to press reports, he bragged about it.

Yet despite evidence that he posed a possible danger to the community, the officials released him anyway, possibly without notifying his family or arranging for specific probation supervision protocols.

The L.A. Board of Supervisors has begun a review of how this happened.

They would do well to begin that review by reading the Little Hoover Commission’s studies into the state’s incarceration policies. In a number of separate reports over the last 10 years, we predicted the sad, unintended consequences of California’s failure to implement reforms or finance mechanisms to protect innocent people from the worst criminals.

The reports can be found on our website, www.lhc.ca.gov. They can be summarized easily enough because the problem was so obvious:

California’s decades-long get-tough-on-crime laws led to ever-longer prison sentences for all kinds of crimes, not merely violent ones.

The solution, too, was obvious:

Forced to act by U.S. Supreme Court decree, elected officials championed Proposition 47 and passed Assembly Bill 109, proposed and signed by Gov. Jerry Brown. Both sought to reduce and realign the prison population by releasing non-violent criminals early and shifting control of other offenders to the counties.

Our commission pointed out that these efforts, however well intentioned, shifted large numbers of state prisoners to the counties without adequately paying the added cost of their upkeep or supervision upon release.

In 2011, we warned: “A badly managed or inadequately financed realignment could put offenders and the public at unacceptable risk.”

For several years, county after county — including L.A. County — told us they already lacked the manpower or money to supervise the criminals they had. And that was before realignment. By sending them more prisoners, California state prison officials were threatening to overwhelm already understaffed probation departments.

In 2014, our commission again called for sane policies that would make sure the most violent criminals remained in custody or under effective, vigilant supervision upon release. In particular, the commission called on the state to help counties create and pay for systems to ensure violent criminals are only released after a fact-based evaluation of their dangerousness. And once they are released, to pay to ensure that these violent felons are effectively supervised and safely reintegrated into their community.

We were not subtle, writing: “Officials have largely ignored 40 years of research on how to reduce recidivism and improve public safety in favor of rhetoric that sounds tough on crime but in some cases actually has the opposite effect on public safety.”

We were still ignored. The problem remains. Whether Mejia’s release from state prison was directly due to Proposition 47 or AB109 is irrelevant. It was the state’s movement of convicts to already underfunded and overwhelmed counties that has swamped probation offices, vastly increasing probation officers’ caseloads, and rendering them unable to keep tabs on men like Mejia.

Until all of us demand changes in how the criminal justice system incarcerates violent criminals and supervises them when they are eventually released — and until we are willing to pay for those protections — Officer Boyer won’t be the last victim of all of our inaction.

Jonathan Shapiro is a former federal prosecutor, former chair of California’s Little Hoover Commission, and creator and executive producer of the TV series “Goliath.” The views expressed here are his alone, not those of the commission.