Get ready for a four-way crossover of all your favorite Chicago shows! NBC is airing a three-hour crossover between “Chicago Fire,” “Chicago Med,” “Chicago P.D.” and new show, “Chicago Justice,” on Wednesday, March 1 from 8 to 11 p.m. EST.... 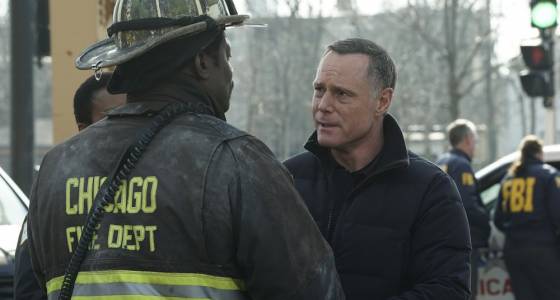 Get ready for a four-way crossover of all your favorite Chicago shows! NBC is airing a three-hour crossover between “Chicago Fire,” “Chicago Med,” “Chicago P.D.” and new show, “Chicago Justice,” on Wednesday, March 1 from 8 to 11 p.m. EST. Of course, “Med” does not air on Wednesday nights, but the characters of the drama series will nevertheless drop by in the epic, action-packed crossover.

What will happen in the Windy City that prompts the fire department, the justice system, the hospital staff and the police department to work together? An intriguing case. According to the official synopsis, “Chicago Fire” kicks off the special event by responding to fire call. An old, ill-equipped factory turned workspace is being engulfed in flames. Several victims are trapped in the fire, including Olinsky’s (Elias Koteas) daughter. With many injured people being wheeled in to the hospital, the staff in “Chicago Med” will do their best to manage to sudden influx of patients.

Then, at 9 p.m., “Chicago P.D.” kicks off its hour by investigating the case. While Olinsky’s daughter fights for her life at the hospital, Voight (Jason Beghe) and his team examine the potential originals of the fire. They try to find a link between the building owner, potential suspects and the victims that were trapped in the blaze. The Intelligence Unit is determined to find the culprit.

Finally, the four-way #OneChicago crossover wraps up in “Chicago Justice.” The police department has arrested the perpetrator but now it is up to the District Attorney’s Office to put him behind bars. Lead investigator Antonio Dawson (Jon Seda) and prosecutor Peter Stone (Philip Winchester) work hard to put the man responsible for committing arson behind bars but it’s easier said than done because he has employed a high powered defense attorney. The sleazy lawyer uses every trick in the book to get his client acquitted of all charges.

The Chicago crossover begins on Wednesday, March 1 at 8 p.m. EST on NBC.

In the four-way Chicago crossover, an arson case brings the fire department, the police department, the hospital staff and the legal system together. Catch #OneChicago on Wednesday, March 1 at 8 p.m. EST on NBC. Photo: Elizabeth Morris/NBC