Former President Barack Obama was spotted Friday afternoon at a downtown Starbucks store in New York City. Obama, who recently returned from a vacation where he went kite surfing with Richard Branson, was spotted leaving an office building... 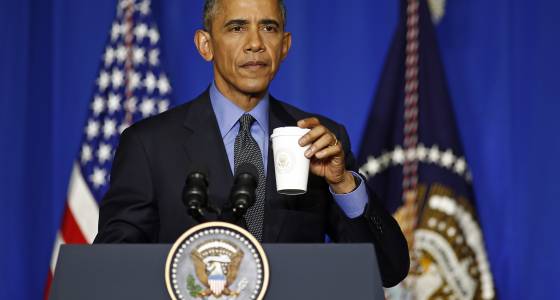 Former President Barack Obama was spotted Friday afternoon at a downtown Starbucks store in New York City. Obama, who recently returned from a vacation where he went kite surfing with Richard Branson, was spotted leaving an office building with a coffee in his hand and was seen walking toward his vehicle. A large crowd soon gathered to greet the former president.

Obama appeared to be in a relaxed mode. He did not wear a tie and left his shirt unbuttoned at the top and waved toward the crowd that cheered for him.

Allan Smith from Business Insider captured a video of Obama walking toward his vehicle. Other Twitter users also captured the crowd's excitement on spotting the former POTUS.

The purpose of Obama's visit to New York was not immediately clear.

Obama was also spotted Thursday night with his daughter Malia at Emilio’s Ballato in Soho, according to the Instagram page of the restaurant.

Obama was ranked the 12th best American president in a new poll called the Presidential Historians Survey conducted by C-SPAN last week ahead of Presidents Day.

In 2012, Obama defeated Mitt Romney in New York City with 81 percent of the votes, while Romney had just 18 percent. It was a tie between Romney and Obama in the Midtown Manhattan district where President Donald Trump's Trump Tower is located, according to The New York Times.

Most recently, Democratic lawmakers from Chicago, citing Obama's popularity, said they want a long stretch of Interstate-55 renamed as the "Barack Obama Expressway." Rep. La Shawn Ford (D-Chicago) said Wednesday he was working to draft a legislation for the move.