What Fox News and UC Berkeley have in common

The lesson likely to be widely drawn from the eviction of Bill O’Reilly from Fox News, announced Wednesday, is that even the biggest of big shots can’t evade their comeuppance forever. Put simply, “what goes around comes around.”This will no doubt... 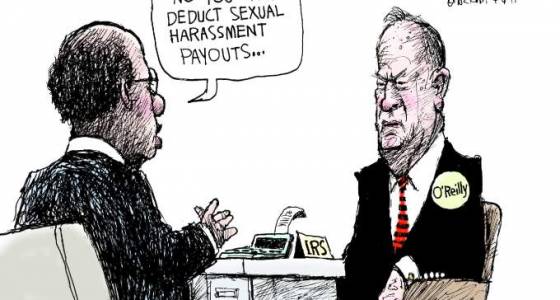 The lesson likely to be widely drawn from the eviction of Bill O’Reilly from Fox News, announced Wednesday, is that even the biggest of big shots can’t evade their comeuppance forever. Put simply, “what goes around comes around.”

This will no doubt gratify the legions who detest O’Reilly for his politics, his abusive manners, his baleful influence on American public discourse and his reported history of sexual harassment, the proximate cause of his departure from Fox.

But it’s the wrong lesson. The right lesson is less uplifting. It’s that if you bring in lots of money for your employer and have the right friends in the right places, you can get away with the most egregious conduct almost forever.

O’Reilly, after all, has been at the top of the broadcasting world for at least a couple of decades. He made it all the way to the post-retirement age of 67 before getting fired despite having been publicly accused of sexual harassment, in great detail, by a Fox producer in a quickly-settled lawsuit nearly 17 years ago. The terms of his separation from Fox haven’t been disclosed, but it’s a safe bet that it will be measured in the millions of dollars.

What may be most telling about the O’Reilly case is that it’s far from unique. Indeed, many of its features were replicated at an institution that, on the surface, is as different from Fox as one could imagine: UC Berkeley. Neither Fox nor Berkeley would probably relish being discussed in the same sentence, but it’s their handling of accused serial harassers that makes them cousins.

The Berkeley case involves renowned astronomer Geoff Marcy, who was forced to resign his tenured professorship in 2015 after reports surfaced of multiple accusations from students of unwanted sexual overtures. Marcy had joined the Berkeley faculty in 1999 from San Francisco State University and was touted as one of its stars. Often cited as a candidate for the Nobel Prize, he commanded millions of dollars in research funds.

As BuzzFeed observed upon breaking the story of Berkeley’s sub-rosa investigation of the astronomer, Marcy’s behavior had been an open secret among his colleagues in astronomy; some had witnessed what they considered improper conduct at a major scientific conference. Confronted by what seemed to be a wall of tolerant silence within the department, many female astronomy students felt their only recourse was to keep out of Marcy’s way, even though that could hamper their career development. Other promising graduate candidates avoided Berkeley altogether.

The university’s initial response after investigating the allegations was effectively to let Marcy off with a warning that repetition would have more dire consequences. Marcy later claimed that he had changed his behavior years earlier, after being told by colleagues that “it made women uncomfortable.”

BuzzFeed’s disclosure of Berkeley’s quiet slap on the wrist to Marcy ignited a firestorm of condemnation.

Astronomy department co-chair Gibor Basri, an old friend of Marcy’s who had known of the allegations and the investigation, issued a remarkably tone-deaf statement the day after the article calling the event “hardest for Geoff in this moment.” But two days later, Basri joined 23 astronomy faculty members in a formal statement asserting that Marcy “cannot perform the functions of a faculty member.” Two days after that, Marcy resigned.