We're white -- and fearful of the police (Letters to the editor)

There is an urgent need for Portland city officials and police to critically evaluate and revise their practices in dealing with protests. Currently police use racial profiling and intimidation tactics, such as military-grade riot gear and unwarranted aggressive... 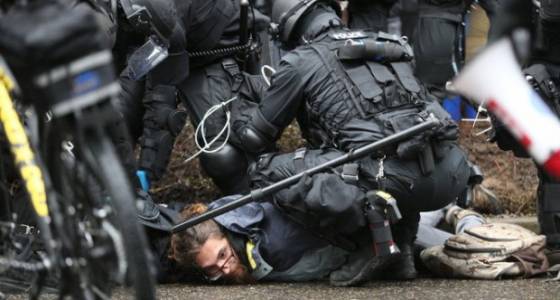 There is an urgent need for Portland city officials and police to critically evaluate and revise their practices in dealing with protests. Currently police use racial profiling and intimidation tactics, such as military-grade riot gear and unwarranted aggressive behavior. In turn, these actions lead not only to an escalation of conflict and violence, but also the suppression of free speech.

At the Feb. 20 protest in Portland, our family, including our two young sons, witnessed these maligned practices. We peacefully assembled with a majority of protesters on the sidewalk to show solidarity with our communities of color and to exercise our First Amendment rights. Without clear warning, police in riot gear violently burst through the small traffic blockade, jumping into the crowd on the sidewalk and endangering the safety of all.

The violence was instigated entirely by the police. It was unnecessary and disproportionate given that the protesters, including those in the street, were nonviolent. The safety of protesters and their right to free speech and assembly was disregarded. Even more, it was clear that the goal of the police action was to physically intimidate protesters and to discourage future civil action.

As a white family, for the first time, we feared for the safety of our children precisely due to the presence of police officers. What is most disturbing, however, is that the fear and injustice we felt momentarily pales in comparison to what communities of color must feel on a daily basis when interacting with the Portland police.

Showing up in riot gear is troubling

The protesters are not entirely blameless. The fact that a number of them mask their faces makes even my knee-jerk liberal parents wary of their intentions. But protests so far this year have been far less destructive than those that took place immediately after the election. The Portland Police, though, do not appear to have similarly de-escalated their tactics, as demonstrated by their use of tear gas to disperse the protesters in January, even shooting a canister directly into one man's face.

The fact that the police show up in riot gear at a protest when things are relatively calm (I attended the first hour of the pre-march rally on Jan. 20 and saw a line of helmeted, vested police officers in front of the Nordstrom's at Pioneer Square when departing) is troubling. If the "weapons effect" theory that has been written about in such publications as Psychology Today has any truth to it, such an early presence of law enforcement in quasi-military gear could even increase the chances of a protest turning violent.

If nothing else, I would suggest that Portland police deploy officers in regular, less-threatening uniforms to guard the protests at first, and keep the riot police in reserve nearby (though out of sight, if possible) so they can come in if the situation truly does get out of hand.