Estonia is standing up to Russia by building new military barracks and expanding training ranges in preparation for a massive NATO build-up in the region. Dozens of German army tanks arrived Friday as part of the military alliance’s deployment and... 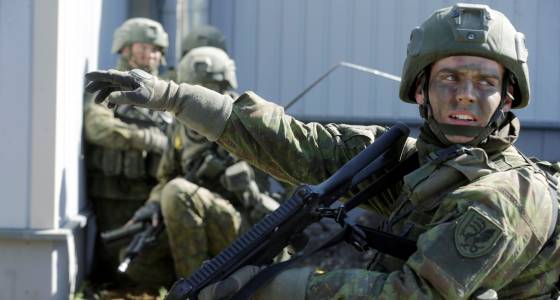 Estonia is standing up to Russia by building new military barracks and expanding training ranges in preparation for a massive NATO build-up in the region. Dozens of German army tanks arrived Friday as part of the military alliance’s deployment and hundreds more are expected to arrive at the central Lithuanian military base of Rukla later this year.

"We want our allies to feel at home in Estonia. The Estonian government has carried out the necessary preparations for this. We have built barracks and expanded training ranges. But it is most important for Estonian people to accept our allies, as this is the way to get closer to the aim for the sake of which Estonia is in NATO and NATO is in Estonia. This aim is for us to have better defense," Lt. General Riho Terras, head of the Estonian Defense Forces, said during an independence day speech this week marking the nation's 99th anniversary from Russia.

The general added that Estonian forces remain close to other NATO members after serving alongside U.K. troops in Afghanistan, French troops in the Central African Republic and Danish troops in Balkan peacekeeping missions.

NATO plans to send four multinational battalions to Estonia, Latvia, Lithuania and Poland this spring from more than a dozen nations. The 1,200-strong battalion in Estonia will be led by the U.K and more troops are expected to start arriving in April. NATO Secretary General Jens Stoltenberg has said the battalions will be ready for action if necessary by June.

Estonia and other Baltic states have been preparing for a potential Russian invasion since Moscow's 2014 annexation of Crimea from Ukraine. The international community's inability to protect Kiev from the Kremlin coupled with Russian President Vladimir Putin's warning that he will defend Russians wherever they live has also spooked Eastern European nations.

In Lithuania, where Russia has invaded before, civilians have spent their weekends learning counterinsurgency tactics such as filtering dirty water and recognizing Russian weaponry. The best way to prevent war is to “demonstrate to the aggressor that we are ready to fight for our freedom, for every centimeter of our land,” Defense Minister Juozas Olekas has said.

Estonia, home to 1.3 million people, has seen a jump in military enrollment and has spent recent months courting world leaders in Europe and Washington to ensure its protection. “It’s living proof that history never ends,” said Juri Luik, a former Estonian foreign and defense minister. “We have to explain who we are all over again.”