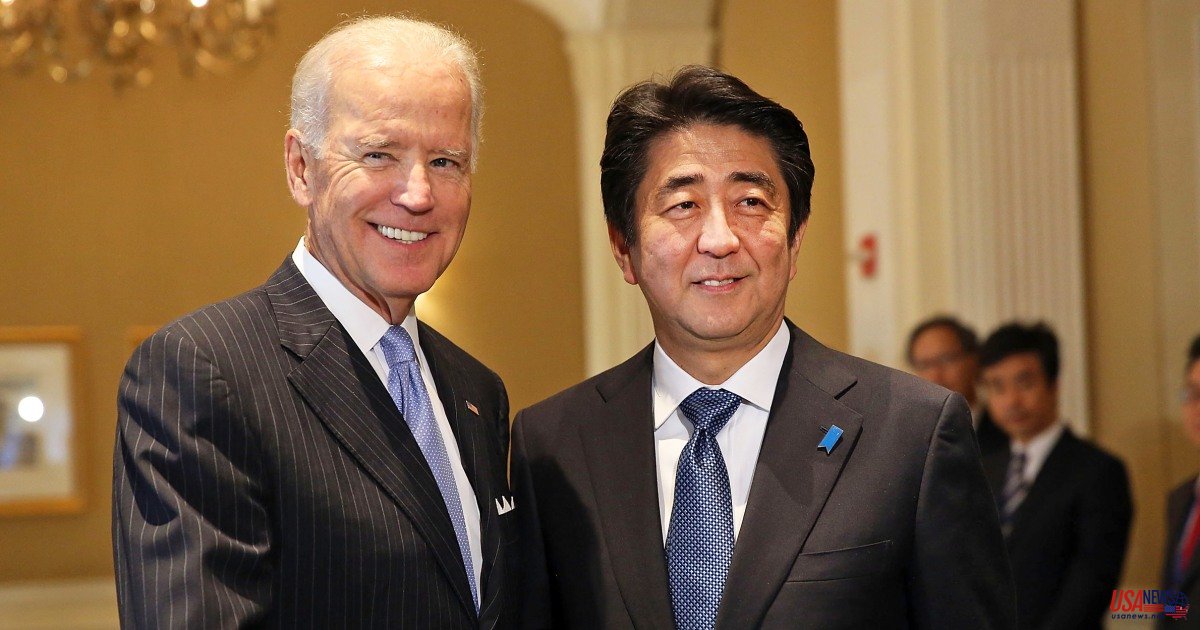 Biden released a statement Friday morning stating that he was shocked, outraged and deeply saddened by Abe's passing. He called it a tragedy in Japan. Biden and Abe were close friends during the Obama administration. They met in Tokyo and Washington.

Biden stated in a statement that he was a champion for the Alliance between our countries and the friendship among our people. His vision of an Indo-Pacific free and open will continue to be the vision of the longest-serving Japanese Prime Minister. He was deeply concerned about the Japanese people, and devoted his entire life to their welfare. He was still engaged in the work for democracy, even when he was attacked."

Biden stated that while there are many details that we don't yet know, Biden indicated that violence is never acceptable. Gun violence leaves deep scars on those who are affected. In this time of grief, the United States stands by Japan.

Biden signed Friday's executive order to protect abortion access at a White House function. The president stated that Abe's passing is unlikely to have a significant impact on Japanese security and stability. Biden indicated that he would visit the Japanese Embassy in Washington, D.C. later in today to sign a condolences card.

Kamala Harris, Vice President of the United States of America, said Abe was a close friend. She said that the U.S. stands "with our Japanese friends" in honoring Abe and condemning his horrific act of violence.

Trump, the former president, wrote on Truth Social that Abe had been shot and was a friend of mine. He also said that the incident was a devastating blow to Japan's wonderful people.

Barack Obama, former President, posted several tweets in which he expressed shock and sadness at the death of his friend.

He said that former Prime Minister Abe was dedicated to Japan and the country he had served. "I will forever remember the work we did together to strengthen our alliance, that moving experience of traveling to Hiroshima, Pearl Harbor, and the grace he showed me and Michelle by his wife Akie Abe."

In a statement, former President George W. Bush stated that he met Abe in 2006 while he was prime minister and found him to be a caring and decent man. Bush stated that Abe was a "true patriot for his country and wanted to continue serving it."

In remarks made during the G20 Ministerial Meeting in Bali, Indonesia, Secretary of State Antony Blinken stated that the assassination was deeply disturbing and that Abe was a leader with great vision and did remarkable work even though he was prime minister.

U.S. U.S. Ambassador Rahm Emanuel stated in a statement, "Abe was a leader before his time." He was recognized by the public as being the longest-serving prime minster in Japanese history. A Japanese statesman. A leader in the world. America's friend. His voice was clear and will be missed. The United States has lost an important partner and an outspoken advocate of our shared ideals."

Senator Jack Reed, D.R.I., chair of the Senate Armed Services Committee tweeted Abe was "a remarkable leader for Japan, a strong partnership for the United States and a global champion for democracy."

Rep. Adam Smith (D-Calif.), his House counterpart, stated on Twitter that Abe led Japan during a "critical period for our relationship -- our thoughts and prayers are with his family, as well as the Japanese people, in this time of grief."

Many lawmakers shared photos from their meetings in person with Abe.

"Tragic loss to one of Japan's top statesmen," Sen. John Cornyn (R-Texas) wrote along with a photograph on Twitter.

Sen. Deb Fischer (R-Tenn.) wrote that Abe was a great leader and a good friend to the US.

Senator Rick Scott, R-Fla. made the statement in an outraged statement.