By Leonid Bershidsky Geert Wilders, the anti-Islam front-runner in the Dutch general election campaign, owes a large debt -- ideologically, strategically and tactically -- to U.S. Republican leaders, from Ronald Reagan to Donald Trump. But the ways in which... 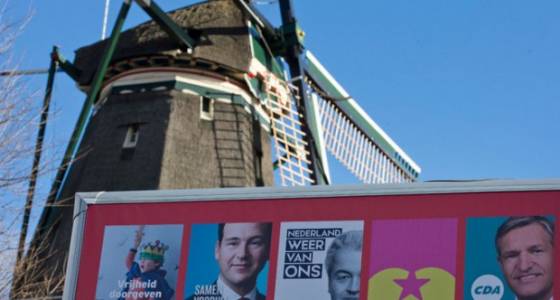 Geert Wilders, the anti-Islam front-runner in the Dutch general election campaign, owes a large debt -- ideologically, strategically and tactically -- to U.S. Republican leaders, from Ronald Reagan to Donald Trump. But the ways in which he is different from them, and the ways in which the Netherlands is different from the U.S., make it unlikely that he'll win power in the March 15 elections.

In a country which doesn't have much of a political campaigning traditions, Wilders looks more like Trump than any other Dutch politician. "Wilders has the same tactics as Trump," says Erik van Bruggen, the head of BKB, an Amsterdam firm that organizes advocacy campaigns and runs a campaigning school for aspiring politicians. "This campaign is all about him. He campaigns via Twitter, he refuses to participate in debates or give critical interviews, he pushes his message directly to the voters, creating the impression that he tells it like it is, without trying to talk smooth or soft."

Wilders's audible Limburg accent -- funny to more educated Dutch -- is the stylistic equivalent of Trump's quirky colloquialisms. Like Trump, Wilders is impervious to accusations: A recent conviction for inciting racial hatred (by asking an audience if they wanted more or fewer Moroccans in the Netherlands) only boosted his public approval ratings. Comparisons between the Dutch nationalist and Trump are so frequent that Politico headlined a profile of Wilders "The Man Who Invented Trumpism."

But the American roots of the Wilders phenomenon go deeper. In a country that has embraced socialist policies, Wilders has always looked to U.S. conservatives for an alternative path to voters' hearts. Koen Vossen, a lecturer in political science at the Radboud University Nijmegen, traced this trajectory in a recent book, "The Power of Populism," a rare attempt at an objective dissection of Wilders' views and tactics.

Wilders got his start in politics in 1990, as a staffer for VVD, the mainstream liberal party that is now led by Prime Minister Mark Rutte, the very same party Wilders' PVV is beating in the polls now. In the 1990s, the VVD was led by Frits Bolkestein, who became Wilders' political mentor. Bolkestein was a proponent of Reagan's and Margaret Thatcher's free market economic policies, and so, for a while, was Wilders, who rose from a lowly staffer to a parliament member for the VVD.

In those early years of his career, Wilders, an expert in the convoluted Dutch social security system in which he once worked, mainly attacked entitlement abuses and advocated scrapping the minimum wage.

At the same time, he worked on a lengthy report on the dangers of Islamic fundamentalism and terrorism. In the late 1990s it wasn't a particularly popular theme, but Wilders was strongly pro-Israel -- another U.S.-style feature in a Europe that tended to blame both sides of the Arab-Israeli conflict -- and he had plenty of help from conservative U.S. experts, including future defense secretary Donald Rumsfeld. When 9/11 happened, it was validation of his work.

"His in-depth knowledge of Muslim extremism made him a sought-after expert on the subject," Vossen wrote. "He built a reputation as a very loyal supporter of the American War on Terror and all accompanying measures, such as military interventions in Afghanistan and later Iraq."

Back then, he was still a VVD member. He decided to split off from the party in 2004, when it became clear it didn't share his anti-Islam slant and wasn't inclined to believe in a Muslim "axis of evil." Wilders's own life changed drastically that year: He was put under constant government protection after a Muslim extremist shot provocative filmmaker Theo van Gogh for his open mockery of Islam. Wilders turned out to be on the terrorist group's hit list too.

The Wilders Group, which later morphed into the PVV, initially included just two other members -- conservative theorist Bart Jan Spruyt and journalist Martin Bosma (who is now the PVV's chief ideologist). Bosma, an alumnus of the New School for Social Research in New York, was a student of U.S. campaigning and speech-writing. His heroes included Karl Rove, Pat Buchanan, Irving Kristol. Spruyt, too, was plugged into the U.S. conservative scene. In 2005, he took Wilders on an educational and fund-raising trip to the U.S. -- to visit institutions such as the Heritage Foundation and the American Enterprise Institute. Richard Perle and Grover Norquist were among the people Wilders met on that tour, and they inspired him to think about setting up a party dedicated to lowering taxes.

U.S. neoconservatism and the War on Terror were the major inspirations for the Wilders Group's first political platform. Later, however, he dropped the economic neoliberalism because it was unpopular in the Netherlands. His current economic program promises increased benefits to native-born Dutch, funded by the elimination of aid to immigrants. But Wilders appears reluctant to talk about his economic program in much detail. "It's outside his comfort zone," Vossen told me in an interview. "If this election were about the economy, Wilders wouldn't be doing so well. But, unfortunately for the governing coalition, it has done a decent job of the economy, so the election is about the atmosphere in the Dutch society."

That atmosphere is created by increasing tension between native-born Dutch and immigrants, but also, in large part, by external events -- terrorist attacks in France and Belgium, the prominence of the Islamic State, the Trump movement in the U.S. The way Wilders exploits these events comes straight from U.S. Republican playbooks -- those used by the Tea Party long before Trump.

"These are all U.S. campaign techniques," Vossen says. "The framing, the mudslinging, the repetition of the key message in very simple words, meant for the common man -- Henk and Ingrid, as Wilders calls them. Intellectuals laugh at that -- and they fall into the same trap that the Republicans learned to set for the U.S. elite."

It has all worked up to a point. Recently, however, the PVV's popularity has been slipping -- and it's expected to do worse in the election than in current polls, just like in 2012. If in the U.S. and the U.K., many were too shy to tell pollsters they preferred a populist agenda, in the Netherlands many say they'll vote for Wilders to push mainstream politicians in a more nativist direction. Most Dutch people -- including some of those who say they'll vote for him -- don't really want him to win.

"The Dutch have very definite notions about their prime minister," van Bruggen says. "They want solid, trusted leadership, they want experience." The Dutch could, perhaps, vote for an outsider -- they nearly handed power to Pim Fortuyn, the public intellectual who was assassinated in 2002 right before an election he could have won. Wilders, however, doesn't fit the bill. He is one of the country's longest-serving legislators, a political professional who has proved incapable of working in one of the Netherlands' almost inevitable governing coalitions.

In 2010, the minority government led by the VVD and the Christian Democrats made a deal with the PVV to ensure its support -- but Wilders failed to keep his end of the bargain. That's why today, no major party is willing to work with him. "He's not seen as reliable," Vossen says.

There's another reason why the PVV's poll ratings are not usually a reliable indicator of its actual performance. The party only has one official member -- Wilders himself: The leader wants to eliminate the possibility of internal squabbles that plague other Dutch parties. He achieves that goal, but at the price of having no grassroots infrastructure, no party machine on which to fall back on as Trump fell back on the Republican Party after winning the nomination. Vossen says no more than 70 people work three days a week or more for the PVV, and there are fewer volunteers than for any of the major parties.

Unlike Trump, Wilders draws no energy from big rallies. He has always been fonder of analytical and parliamentary work, but the heavy security surrounding him since the van Gogh assassination also makes it nearly impossible to go on the campaign trail. This year, Wilders barely managed to hold one campaign event, a walkabout in a Rotterdam suburb. On Thursday, he announced he was suspending his campaign because an intelligence officer assigned to his protection may have been passing information about his whereabouts to a Dutch-Moroccan criminal gang.

This ever-present danger -- he named his English-language autobiography "Marked for Death" -- adds to his romantic appeal, but not necessarily to his trustworthiness in the eyes of pragmatic Dutch voters. The Trump-style campaign Wilders has pursued may actually be working against him today: The media are full of reports of Trump-induced chaos in American government and policy. Wilders, who has loudly supported Trump, is getting associated with his messy first weeks.

Wilders' big moment may not come this year -- he's unlikely to govern even if the PVV comes first, and if it comes second, the establishment will breathe a huge sigh of relief -- but that doesn't mean it won't come at all. A major terrorist attack on Dutch soil or even another 9/11 elsewhere, or an attack on Wilders's own life may instantly change everything. But a dependence on external events is weak ground from which to attack one of the most entrenched political establishments in Europe.