Despite claiming he’s the “least anti-Semitic” person around, President Donald Trump suggested Tuesday the wave of anti-Semitic incidents in the U.S. could be so-called false flags perpetrated by Jews themselves to make his administration... 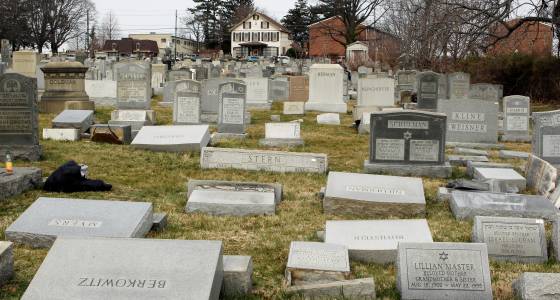 Despite claiming he’s the “least anti-Semitic” person around, President Donald Trump suggested Tuesday the wave of anti-Semitic incidents in the U.S. could be so-called false flags perpetrated by Jews themselves to make his administration look bad.

Trump, speaking before a group of 47 state attorneys general in Washington said the incidents, which included vandalism at old Jewish cemeteries in St. Louis and Philadelphia and bomb threats at Jewish community centers, could be something other than anti-Semitism, Pennsylvania Attorney General Josh Shapiro said after the meeting.

He quoted Trump as saying “the reverse can be true” and “someone’s doing it to make others look bad.” Shapiro, who is Jewish, said he thought the comment was “a bit curious.” Shapiro said before making the odd remarks, Trump earlier condemned the anti-Semitic incidents as “reprehensible,” BuzzFeed News reported.

President Trump suggested Tuesday recent vandalism at two old Jewish cemeteries may not have been anti-Semitic attacks. Above, headstones pushed off their bases at Mount Carmel Cemetery in Philadelphia, Feb. 27, 2017. Photo: Tom Mihalek/Reuters

Philly.com quoted a White House official as saying Trump will address the issue directly Tuesday during his appearance before a joint session of Congress.

“I am the least anti-Semitic person that you've ever seen in your entire life,” Trump said in deflecting a question about bomb threats against Jewish community centers.

Jewish groups have worried about the influence of White House chief political strategist Stephen Bannon, former head of the alt-right Breitbart News, which has provided a platform for anti-Jewish invective.

The Anne Frank Center reacted to the remarks, saying if true, Trump “has gone over the anti-Semitic deep end.

"We are astonished by what the president reportedly said. It is incumbent upon the White House to immediately clarify these remarks. In light of the ongoing attacks on the Jewish community, it is also incumbent upon the president to lay out in his speech tonight [Tuesday] his plans for what the federal government will do to address this rash of anti-Semitic incidents,” Jonathan Greenblatt, CEO of ADL, said in a statement.