Trump just delivered the best speech of his political career

Sometimes a speech is just a speech. And sometimes it heralds the prospect of a great national revival.Donald Trump gave the best speech of his short political life last night, and it had nothing to do with grand oratory. He was thoroughly presidential, speaking... 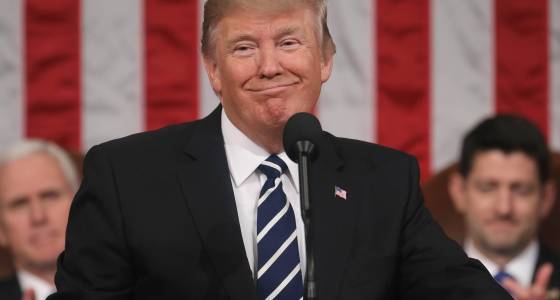 Sometimes a speech is just a speech. And sometimes it heralds the prospect of a great national revival.

Donald Trump gave the best speech of his short political life last night, and it had nothing to do with grand oratory. He was thoroughly presidential, speaking plainly and yet masterfully in projecting an optimistic vision of the America he aims to build.

It is a vision so optimistic and encompassing that even steaming Democrats had to join boisterous Republicans in the applause at times.

Anything you could possibly want, he served it up in a feast of ideas and promises. Trump was at turns resolute, as when he talked about the “broken promises” of ObamaCare.

And he never once mentioned the media or fake news. Hallelujah!

His speech was well written, and well delivered, chock full of initiatives and full of changes in mood.

Trump was aggressive when he wondered how Democrats opposed to border control would feel if they talked to an American who lost his job and maybe a loved one because of an illegal immigrant.

He showed flashes of humor and talked with compassion about the power of school choice to save children from failing schools while recounting the story of a young woman in the audience. She was one of several nonwhites he singled out in a display of diversity that most Dems couldn’t resist.

Most of all, the president led the Capitol to an emotional crescendo by introducing one of his guests, the tearful widow of Ryan Owens, the Navy Seal killed in a recent raid in Yemen. The loud, sustained applause was simultaneously heartbreaking and inspiring.

The president’s goals are huge, but this was no mere laundry of list of government spending and imposition. Instead, Trump infused his core principles — fixing immigration and trade, broad tax cuts, repealing ObamaCare and rebuilding the military — with unifying themes that would make America more fair, more just, more prosperous and yes, great again.

He began by talking about a new “national pride” and a “surge of optimism,” and finished with a flourish, saying, “I am asking everyone watching tonight to seize this moment and –Believe in yourselves.

Believe in your future. And believe, once more, in America.”

It was a not-so-subtle request that citizens keep the pressure on congress to deliver Trump’s agenda.

It is one of the virtues of single-party rule — the same voters put Trump and GOP congressional leaders there, and they have the right to demand action, not talk.

In more immediate terms, the speech slammed the brakes on the building sense that Trump was being hemmed in. Day after day, headline after headline carried a sense of impossibility about his infant presidency. There were too many problems, too much chaos, too much division–there wasn’t much he could do.

Obviously, the president was having none of it, and his performance was another reminder that he is a singular figure in our era. Trump, as he did in the campaign, again displayed an ability to rise to the occasion and seize the momentum from his critics and opponents.

Put it this way: If the Trump of last night is the Trump who shows up to the Oval Office every day, he will be an extraordinary force with the potential to reshape the political landscape of both parties.

Not boxed in by ideology or doctrinal straitjackets, he wants to get big things done for all Americans. Unions allied with Dems are already drifting in his direction because of his commitment to good-paying jobs, and his grace notes on race and religion are not partisan.

Sure, he can be his own worst enemy, but there will be no stopping him if he can bottle last night’s approach. “The time for trivial things is over,” he said at one point in an appeal to Democrats.

Some of them grumbled, but most Americans would agree with him that it’s time to get on with doing big things for the country. He’s ready to lead the way.