Galleries Videos CONTACT ADVERTISE
Famagusta 25°
clear sky
BUSINESS EDUCATION ENTERTAINMENT HEALTH POLITICS SCIENCE SPORTS TECHNOLOGY
12:08 Guide To Online Sports Betting: How To Choose A Sportsbook
08:28 What Are Some Reasons to Consult a Brain Injury Lawyer?
09:24 Blockchain Solutions for Enterprises: How To Increase Efficiency And Profitability
07:06 How To Deal With A Car Crash In New York
17:43 Tips to keep in mind while choosing the casino site
11:34 Relation Between Employee Theft and Pre-employment Screening Check
04:37 Search your own desired site to play sports for betting
18:00 Top 3 Career Path Options for Business Analysts Preview
15:35 The history of Imen Jane, who is the influencer and the charges on the...
18:48 Sebastian Vettel's Greatest Races
BIST
1124
GOLD
459.718
USD
7.6460
GPB
9.7812
EUR
8.8844
Breaking News
Top 3 Career Path Options for Business Analysts Preview
Close

Fear and anxiety was gripping much of the nation's immigrant communities as residents across the map braced themselves for the possibility of federal agents making arrests under president Donald Trump's immigration order targeting undocumented... 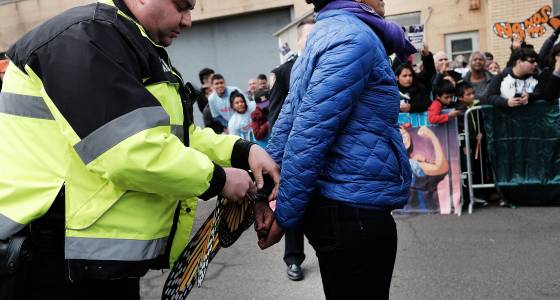 Fear and anxiety was gripping much of the nation's immigrant communities as residents across the map braced themselves for the possibility of federal agents making arrests under president Donald Trump's immigration order targeting undocumented foreign nationals in the U.S. illegally.

The apprehension spread to some elected officials, who sent a letter to the federal government on Monday seeking clarity about the purported targets of the raids by the U.S. Immigration and Customs Enforcement (ICE). Only violent criminals were supposed to be rounded up, according to Trump's order, but some California state Senate and Assembly members said that wasn't the case, the San Jose Mercury News reported.

"Despite saying he’d only target dangerous criminals, President Trump’s executive orders target practically every undocumented person in California," Senate President Pro Tem Kevin de León, D-Los Angeles, said in a statement. "The lack of transparency by ICE is creating havoc and confusion in communities across the state and that has to change. It’s time for ICE to come clean on what they’re doing and how they intend to operate going forward."

While it was already confirmed these ICE raids were being carried out in California, along with locations from Arizona to New York City earlier this month, the places being targeted by the branch of the U.S. Department of Homeland Security have since expanded to include more states.

Aside from the arrests and detention, deportations, one of Trump's signature campaign promises, have officially begun.

Below is a glimpse at other places across the country where the ICE raids have been conducted in February.

At least four undocumented immigrants were arrested in the town of Ypsilanti last week, the Detroit Free Press reported at the time. While it wasn't immediately clear if the people arrested were dangerous criminals, they were "persons who were illegally in the United States," ICE spokeswoman Rachael Yong Yow said.

Dozens of undocumented immigrants working at various restaurants were rounded up across Mississippi last week. An immigration attorney told the Clarion-Ledger a small portion of the 55 people arrested didn't fit the criteria of the targets of Trump's executive order. "Based on the knowledge we have, it seems like these are casualties," Peterson said. "In a criminal investigation, these guys were bystanders," Abby Peterson said. "That's what it seems, but we don’t know."

ICE agents staked out a church's homeless shelter before apprehending several undocumented immigrants as they exited the facility in northern Virginia earlier this month, according to local news outlet the Culpeper Star Exponent.

Churches have typically been off-limits to the raids, serving as sanctuaries to many undocumented immigrants with the help of local religious leaders.

While the raids have not been conducted in every state, the uncertainty of where ICE will go next was enough to scare such geographically diverse communities as Connecticut, Missouri, New Jersey and Oregon.