It's generally foolish to look for clear thought and sincere intent in anything Donald Trump says. But a glimmer of hope emerged in his Monday comments on America's recent military ventures. "We have to start winning wars again," he declared.... 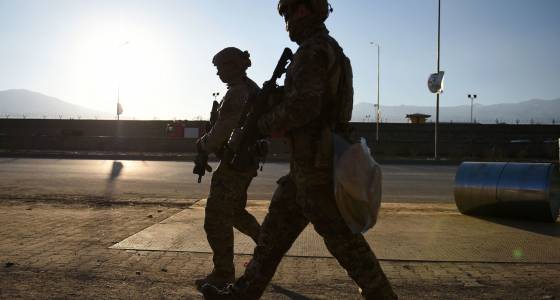 It's generally foolish to look for clear thought and sincere intent in anything Donald Trump says. But a glimmer of hope emerged in his Monday comments on America's recent military ventures. "We have to start winning wars again," he declared. "We've either got to win or don't fight it at all."

If he means it, he should make a firm decision about Afghanistan, where we have no prospect of victory and no appetite for what it would take even to gain the upper hand. In truth, we have already lost that war. It has gone on for more than 15 years, making it the longest conflict in our history. And we are further from victory today than when we arrived.

U.S. military officials, reports Reuters, acknowledge that the Kabul government controls only 60 percent of the nation's territory. The Taliban, which we invaded the country to remove, controls some 15 percent, with the remainder contested. The Islamic State and al-Qaida are also in the fight.

The stalemate is more or less a permanent fact of life. George W. Bush turned his attention away from Afghanistan once he decided to invade Iraq, and his administration was content to stave off disaster. Barack Obama mounted a surge, boosting the number of U.S. troops from about 30,000 to about 100,000 in his first two years, but by the time he left office, he had drawn them down to 8,400.

Both presidents did essentially the same thing, refusing to escalate enough to achieve a lasting victory — and refusing to leave. Their approach was to fight but not to win.

The question for Trump is whether to accept that reality and get out or deny it and stay. Gen. John Nicholson, commander of U.S. forces in Afghanistan, recently told a Senate committee that he needs "a few thousand" additional troops. But such a modest boost would amount to a holding action, at best.

"That a few thousand troops could somehow reverse the present situation and ensure progress toward victory is obviously a fantasy of the first order," wrote retired Air Force Lt. Col. William J. Astore in The American Conservative. A more ambitious escalation, however, would exceed what the vast majority of Americans would support.

What we've done is plenty. Rajan Menon, a scholar at the City College of New York and Columbia University, notes that, even adjusting for inflation, we have spent more on economic aid alone than we spent after World War II on the Marshall Plan, which covered 16 countries.

The total bill for the war, including future costs for medical care for wounded veterans, is estimated at upward of $4 trillion. In his Tuesday address to Congress, Trump lamented that for the cost of the Iraq and Afghanistan wars, "we could have rebuilt our country — twice."

Our presence and money should give our partners in Kabul an overwhelming advantage over the enemy. But as Menon wrote in The National Interest, we have yet to see "anything resembling an effective government with national reach and local purchase. Moreover, it has become less cohesive and more fractious."

Contrast that with the performance of Taliban forces — which have been on the receiving end of thousands of American bombs and bullets yet have not only survived but gained ground. Their fighting spirit and resilience, despite comparatively meager resources, underline the central importance of motivation in war. The enemy has it. Our Afghan allies don't — and neither do we.

Most Americans, after all, pay no attention to this war and haven't for years. It would be surprising if 1 in 50 could name the current president of Afghanistan. Most probably couldn't locate the country on a map.

The United States invaded in 2001 for a simple, specific purpose: to remove the Taliban regime and smash al-Qaida. After that task was done, the public lost interest. In the absence of broadly felt sacrifices in blood or treasure, Afghanistan was about as relevant to most of our lives as Bolivia. The war has been forgotten, and presidents have preferred that it remain that way.

If Trump is serious about his vow to pursue victory or nothing, though, he can't forget Afghanistan. At this stage, he could withdraw and put the blame for the failure on his predecessors. Or he could do what Bush and Obama did: String things out and leave the problem to someone else.

Steve Chapman, a member of the Tribune Editorial Board, blogs at www.chicagotribune.com/chapman.