President Donald Trump told a group of CEOs Thursday that a “military operation” had been launched to round up criminal undocumented immigrants.“We’re getting really bad dudes out of this country and at a rate that nobody has ever... 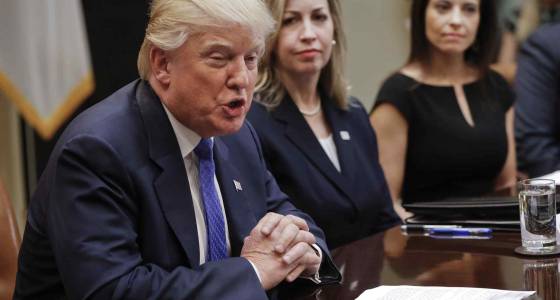 President Donald Trump told a group of CEOs Thursday that a “military operation” had been launched to round up criminal undocumented immigrants.

“We’re getting really bad dudes out of this country and at a rate that nobody has ever seen before,” Trump said. “And they’re the bad ones. And it’s a military operation because what has been allowed to come into our country — when you see gang violence that you’ve read about like never before and all of the things — much of that is people that are here illegally.”

“The president was using that as an adjective,” Spicer said. “It’s happening with precision, and in a manner in which it’s being done very, very clearly.”

Seeking to tamp down growing unease in Latin America, U.S. Homeland Security Secretary John Kelly pledged Thursday that the United States won’t enlist its military to enforce immigration laws and that there will be “no mass deportations.”

Kelly, speaking in Mexico’s capital, said all deportations will comply with human rights requirements and the U.S. legal system, including its multiple appeals for those facing deportation. He said the U.S. approach will involve “close coordination” with Mexico’s government.

Yet while Kelly and U.S. Secretary of State Rex Tillerson tried to alleviate Mexico’s concerns, Trump was fanning them further, with tough talk about “getting really bad dudes out of this country at a rate nobody has ever seen before.”

It was an altogether different message from Kelly and Tillerson, who traveled here to meet with top Mexican officials at a time of intense turbulence for U.S.-Mexico relations. Indeed, Trump acknowledged he had sent his top diplomat south of the border on a “tough trip.”

In contrast to Trump, Tillerson and Kelly emphasized a U.S. commitment to work closely with Mexico on border security, illegal immigration and trafficking of drugs and weapons — issues Trump has made a central focus of his young presidency, much to Mexico’s dismay. Both Tillerson and Kelly appeared to downplay any major rift between the U.S. and Mexico.

“In a relationship filled with vibrant colors, two strong sovereign countries from time to time will have differences,” Tillerson said. “We listened closely and carefully to each other as we respectfully and patiently raised our respective concerns.”

For Mexico, that patience was running short.

Foreign Relations Secretary Luis Videgaray noted the “public and notorious differences” between the countries and said the Mexicans had raised the “legal impossibility” of a government making “unilateral” decisions affecting another country. Videgaray has previously raised the prospect Mexico could seek recourse at the United Nations or elsewhere for U.S. moves violating international law.

“It is an evident fact that Mexicans feel concern and irritation over what are perceived as policies that may hurt Mexicans and the national interest of Mexicans here and abroad,” Videgaray said.

The divergent tones from Trump and from his Cabinet officials left Mexico with an uncomfortable decision about whom to believe. Throughout Trump’s first weeks, foreign leaders have grown increasingly skeptical as Trump’s envoys deliver soothing messages that are then negated by the president.

Yet some of the CEOs suggested that there were still plenty of openings for U.S. factory jobs but too few qualified people to fill them. They urged the White House to support vocational training for the high-tech skills that today’s manufacturers increasingly require — a topic Trump has seldom addressed.

“The jobs are there, but the skills are not,” one executive said during meetings with White House officials that preceded a session with the president. (Reporters were permitted to attend the meetings on the condition of not quoting individual executives by name.)

The discussion of job training and worker skills is a relatively new one for Trump, who campaigned for the White House on promises to restore manufacturing jobs that he said had been lost to flawed trade deals and unfair competition from countries like Mexico and China.

Again and again, Trump brought up that theme in his meeting with the CEOs.

Trump’s vice president and top aides delivered one overriding message to the thousands of conservative activists gathered for their annual conference outside of Washington: Don’t blow it.

Speaking at the Conservative Political Action Conference, Vice President Mike Pence said Trump’s victory provided the nation with what could be a once-in-a-lifetime opportunity to install conservative solutions to the nation’s problems.

“This is the chance we’ve worked so hard, for so long, to see. This is the time to prove again that our answers are the right answers for America,” Pence said.