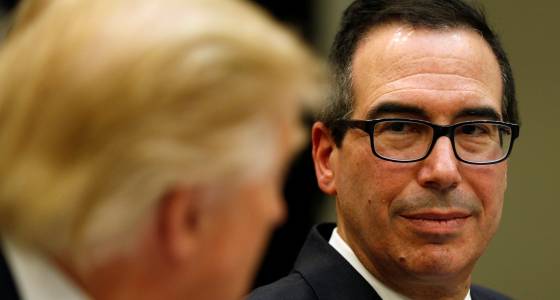 In an interview on Fox News, Mnuchin said the administration is “not touching those now” despite hopes in the Republican Congress to make radical changes.

“So don't expect to see that as part of this budget, OK? We are very focused on other aspects and that's what's very important to us. And that's the president's priority," Mnuchin said.

House Speaker Paul Ryan, R-Wis., however, has endorsed a plan that would eliminate the guaranteed level of care Medicare now provides, replacing it with vouchers to make seniors find their own coverage and that likely would wind up costing them thousands of dollars, AARP President Eric Schneiderwind has warned.

Republicans for years also have been talking about privatizing Social Security.

Trump goes before Congress Tuesday for his first address to a joint session since assuming office Jan. 20.

House Minority Leader Nancy Pelosi, D-Calif., told ABC’s “This Week” Trump has “nothing” to show for his 40 days in office.

Trump has pushed through a series of executive orders since taking office, from trying to cut off immigration from seven Muslim-majority countries to requiring regulations in various federal agencies to be cut to reversing President Barack Obama’s decision on the Keystone XL pipeline. The Departments of Education and Justice this week also rescinded guidelines that would have let transgender students use bathrooms corresponding to their gender identity rather than their chromosomes.

Trump has yet to submit any legislation to Congress, including his plan for rebuilding the nation’s infrastructure or an administration-developed healthcare proposal.