UPDATE: 8:20 p.m. EST — President Donald Trump is expected to propose a 24 percent cut to the Environmental Protection Agency’s budget to $6.1 billion and to reduce its staff by 3,000 workers to 12,000. E&E News and Politico reported the cut would... 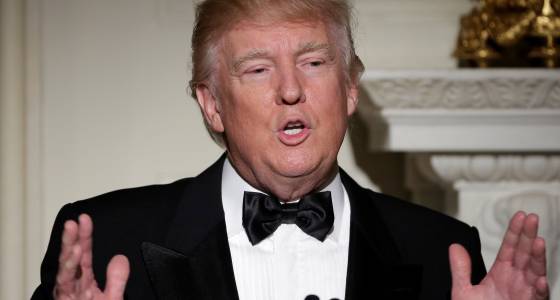 UPDATE: 8:20 p.m. EST — President Donald Trump is expected to propose a 24 percent cut to the Environmental Protection Agency’s budget to $6.1 billion and to reduce its staff by 3,000 workers to 12,000. E&E News and Politico reported the cut would reduce the EPA’s budget to 1991 levels and staffing reminiscent to the mid-1980s.

U.S. President Donald Trump likely will pay for a major bump in defense spending with sharp cuts to the Environmental Protection, the State Department and safety-net programs, reports indicated Monday.

Trump goes before a joint session of Congress Tuesday and is expected to unveil his budget priorities, including a $54 billion increase in defense spending, with an eye toward making good on his campaign promises. He’s expected to tout his rejection of the Trans-Pacific Partnership as a concrete step he has taken to revitalize the U.S. economy.

"We spend billions in the Middle East, but we have potholes all over the country," Trump told the nation’s governors Monday in a preview indicating cuts to foreign aid. "We're going to start spending on infrastructure big."

The budget outline is Trump’s first foray into the legislative process, having spent his first 40 days in office focusing on immigration and deregulation, and taking the executive order route.

Axios reported the White House is planning to send its first budget draft to Cabinet officials Tuesday. The news site said the spending blueprint will point to massive cuts, particularly to climate-change programs.

Trump has indicated he wants the EPA to return to its core missions of clean air and water, and views many of the climate initiatives as superfluous.

Democrats already have started blasting the budget plan. Senate Minority Leader Chuck Schumer, D-N.Y., said it would benefit the wealthy at the expense of the middle class — a reflection of “exactly who this president is and what today’s Republican Party believes in.”

“It is clear from this budget blueprint that President Trump fully intends to break his promises to working families by taking a meat ax to programs that benefit the middle-class," Schumer said. "A cut this steep almost certainly means cuts to agencies that protect consumers from Wall Street excess and protect clean air and water.

The White House is expected to release a full budget in March.