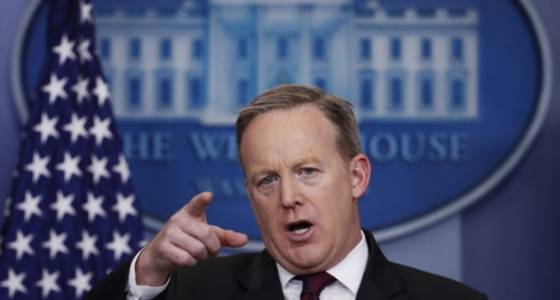 Sean Spicer suggested Thursday that the Trump administration will enforce federal marijuana laws in states where recreational pot is legal.

Medical use, he said, is not in question. But recreational use, including in states like Oregon, faces a possible challenge.

"I think that when you see something like the opioid addiction crisis blossoming in so many states around this country," Spicer said, "the last thing that we should be doing is encouraging people."

Though Spicer drew a connection between opioid use and marijuana, there is no known connection between the two. According to the Centers for Disease Control, in 2015 more than 33,000 people died from opioid overdoses, which includes both heroin and prescription painkillers, "more than any year on record."

The CDC reported that "nearly half of all opioid overdose deaths involve a prescription opioid."

Marijuana overdoses account for no deaths, according to the Drug Enforcement Administration. In fact, a study reported in "Time" in 2016, said that "when states legalized medical marijuana, prescriptions dropped significantly for painkillers."

Still, Spicer said, "There is still a federal law that we need to abide by...when it comes to recreational marijuana and other drugs of that nature."

As far as what that will mean, Spicer said that is "something that the Department of Justice I think will be further looking into."

"I do believe that you'll see greater enforcement of it," he added.

In Oregon, it has been legal to buy, sell and grow cannabis since July 1, 2015. Recreational cannabis is now legal in eight states. Medical cannabis use is legal in 28 states.

"Comments like these only serve to undermine our legal businesses that are following regulations and paying taxes," Sen. Jeff Merkley (D-OR) said Thursday, "and to drive business back into the more dangerous black market."

"I urge the Trump administration to follow its own rhetoric on 'state's rights,'" he told us over email, "and to respect the voters of Oregon and the many other states who have decided at the ballot to legalize recreational marijuana use."

He was not alone in expressing his concern.

"The federal government needs to respect the decisions of Oregon voters. Instead, the Trump Administration is threatening states' rights, including the rights of one in five Americans who live in a state where marijuana is legal," Sen. Ron Wyden (D-OR) said in a statement Thursday.

"Wasting taxpayer dollars and burdening our law-enforcement agencies to go after law-abiding recreational marijuana users distracts from going after criminals and threats to our safety," he added. "I will fight hard against ridiculous federal government intrusions into our state."

Rep. Earl Blumenauer (D-OR) agreed. "I am deeply disappointed by Sean Spicer's statement," he said in a press release Thursday.

"The national prohibition of cannabis has been a failure, and millions of voters across the country have demanded a more sensible approach," he continued. "I'm looking forward to working with the leadership of our newly formed cannabis caucus to ensure that Oregonian's wishes are protected and that we end the failed prohibition on marijuana."

Even GOP lawmakers are not happy about the comments. Rep. Knute Buehler, a Republican representing District 54 in Bend Oregon House of Representatives, said in a statement Friday, "I hope the new President and Attorney General keep their hands off Oregon's marijuana law."

"They should respect the will of the voters and honor state's rights," Buehler said. "Federal intervention will only make a legal market a black market once again."

According to a Quinnipiac poll released Thursday, 71 percent of U.S. voters think "the government should not enforce federal laws against marijuana in states that have legalized medical or recreational marijuana use."

We've reached out to other Oregon lawmakers to see how they feel about the possibility of federal enforcement on recreational marijuana and will update this post with their comments.

Gov. Kate Brown's office declined to comment at this time.