The Trump administration has enlisted senior members of the intelligence community and Congress in efforts to counter news stories about Trump associates' ties to Russia, a politically charged issue that has been under investigation by the FBI as well as... 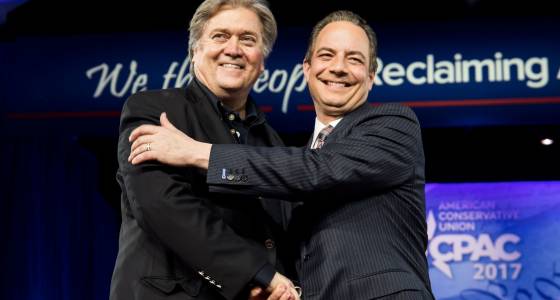 The Trump administration has enlisted senior members of the intelligence community and Congress in efforts to counter news stories about Trump associates' ties to Russia, a politically charged issue that has been under investigation by the FBI as well as lawmakers now defending the White House.

Acting at the behest of the White House, the officials made calls to news organizations last week in attempts to challenge stories about alleged contacts between members of President Donald Trump's campaign team and Russian intelligence operatives, U.S. officials said.

The calls were orchestrated by the White House after unsuccessful attempts by the administration to get senior FBI officials to speak with news organizations and dispute the accuracy of stories on the alleged contacts with Russia.

The White House on Friday acknowledged those interactions with the FBI but did not disclose that it then turned to other officials who agreed to do what the FBI would not - participate in White House-arranged calls with news organizations, including The Washington Post.

Two of those officials spoke on the condition of anonymity - a practice President Trump has condemned.

The officials broadly dismissed Trump associates' contacts with Russia as infrequent and inconsequential. But the officials would not answer substantive questions about the issue, and their comments were not published by The Post and do not appear to have been reported elsewhere.

White House spokesman Sean Spicer confirmed that the White House communicated with officials with the aim of contesting reporting on Russia, but maintained that the administration did nothing improper. "When informed by the FBI that [the Russia-related reporting] was false we told reporters who else they should contact to corroborate the FBI's version of the story."

The White House on Friday defended chief of staff Reince Priebus against accusations he breached a government firewall when he asked FBI Director James Comey to publicly dispute media reports that Trump campaign advisers had been frequently in touch with Russian intelligence agents.

The White House on Friday defended chief of staff Reince Priebus against accusations he breached a government firewall when he asked FBI Director James Comey to publicly dispute media reports that Trump campaign advisers had been frequently in touch with Russian intelligence agents.

The decision to involve those officials could be perceived as threatening the independence of U.S. spy agencies that are supposed to remain insulated from partisan issues, as well as undercutting the credibility of ongoing congressional probes. Those officials saw their involvement as an attempt to correct coverage they believed to be erroneous.

The effort also involved senior lawmakers with access to classified intelligence about Russia, including Sen. Richard Burr, R-N.C., and Rep. Devin Nunes, R-Calif., the chairmen of the Senate and House intelligence committees. A spokesman for Nunes said that he had already begun speaking to reporters to challenge the story and then "at the request of a White House communications aide, Chairman Nunes then spoke to an additional reporter and delivered the same message."

Priebus, in a series of news show interviews, also insisted...

Priebus, in a series of news show interviews, also insisted...

Unlike the others, Nunes spoke on the record and was subsequently quoted in the Wall Street Journal.

In an interview, Burr acknowledged that he "had conversations about" Russia-related news reports with the White House and engaged with news organizations to dispute articles by the New York Times and CNN that alleged "repeated" or "constant" contact between Trump campaign members and Russian intelligence operatives.

"I've had those conversations," Burr said, adding that he regarded the contacts as appropriate provided that "I felt I had something to share that didn't breach my responsibilities to the committee in an ongoing investigation."

The administration's push against the Russia coverage intensified Sunday when White House Chief of Staff Reince Priebus said in television interviews that he had been authorized "by the top levels of the intelligence community" to denounce reports on Trump campaign contacts with Russia as false.

Priebus's denunciations ranged from calling the articles "overstated" to saying they were "complete garbage."

Administration officials said that Priebus's comments had been cleared by FBI Director James Comey and Deputy Director Andrew McCabe. In doing so, the FBI's leadership would appear to have been drawing a distinction between authorizing comments by a White House official and addressing the matter themselves.

Rep. Adam Schiff, D-Calif., the ranking Democrat on the House Intelligence Committee, issued a statement Friday evening saying that if the White House "contrived to have intelligence officials contradict unfavorable news reports, this represents a new and even more grave threat to the independence of the intelligence community."

Former intelligence officials expressed concern over the blurring of lines between intelligence and politics, with some recalling Republican accusations that the Obama administration had twisted intelligence in its accounts of the 2012 attacks on U.S. facilities in Benghazi, Libya.

"I doubt that there was any enthusiasm from the intelligence leadership to get involved in this in the first place," former CIA director Michael Hayden said, noting that it seemed unlikely that Priebus's bluntly worded denials were consistent with the "precise language" favored by intelligence analysts.

"Think Benghazi here," Hayden said in an interview by email. "This is what happens when the intel guys are leaned on for the narrative of the political speakers. The latter have different rules, words, purposes. Getting intel into that mix always ends unhappily, [and] it looks like we just did."

The Trump administration's actions reflect its level of concern about coverage of its relationship with Russia. Trump has continued to praise Russian President Vladimir Putin, even after U.S. intelligence agencies concluded that Russia had interfered in the U.S. presidential race to help Trump win.

Trump has also repeatedly disparaged the intelligence agencies that his administration last week turned to for support. Shortly before taking office, Trump accused U.S. spy agencies of a Nazi-style leaks campaign to smear him.

The White House statements on the issue Friday came after CNN reported that the FBI had refused administration requests to publicly "knock down" media reports about ties between Trump associates and Russian intelligence.

Administration officials disputed the account, saying that rather than soliciting FBI feedback, Priebus had been pulled aside by McCabe on the morning of Feb. 15 and told, "I want you to know" that the New York Times story "is BS."

The FBI declined to discuss the matter.

In a brief interview on the night of Feb. 15, the senior intelligence official said that the suggestion that there was frequent contact between Russians and Trump associates was false, describing any conversations as sporadic, limited and based on Russia's interest in building a relationship with the future Trump administration rather than shaping the 2016 presidential race.

The senior intelligence official appeared to be referring to contacts between Trump's designated national security adviser, Michael Flynn, and Russian Ambassador Sergey Kislyak before Trump was sworn in as president. Flynn was forced out of his job earlier this month after The Post reported that Flynn had discussed U.S. sanctions against Russia with Kislyak and then misled Trump administration officials about the nature of his contacts.

Officials at the CIA and the Office of the Director of National Intelligence declined to comment on whether senior officials at those agencies had discussed Russia coverage with the White House or been involved in efforts to refute stories on that subject.

As a Republican member of Congress, Pompeo was among the most fiercely partisan figures in the House investigation of Benghazi, which centered on accusations that the Obama administration had twisted intelligence about the attacks for political purposes.

It is not unusual for CIA leaders to have contact with news organizations, particularly about global issues such as terrorism or to contest news accounts of CIA operations. But involving the agency on alleged Trump campaign ties to Russia could be problematic.

The CIA is not in charge of the investigation. Given the history of domestic espionage abuses in the United States, CIA officials are typically averse to being drawn into matters that involve U.S. citizens or might make the agency vulnerable to charges that it is politicizing intelligence.

A U.S. intelligence official declined to discuss any Pompeo involvement except to say that he was "not involved in drafting or approving statements for public use by the White House this past weekend on alleged Russian contacts."

Whether there were such contacts remains a major point of contention. Beyond Flynn, the investigation has focused on other figures including Paul Manafort, Trump's former campaign chairman, who had previously served as a paid political adviser to the Putin-backed president of Ukraine.

U.S. intelligence reports cite multiple contacts between members of Trump's team and Russians with links to the Kremlin, during the campaign and afterward, according to officials who have seen them. Such reports were based on intercepted Russian communications and other sources, the officials said.

Nunes, who served as a member of Trump's transition team, has resisted calls for his House committee to investigate alleged contacts between Trump associates and Russia. He said in an interview that after months of investigations, U.S. authorities have turned up no evidence of such contacts.

"They've looked, and it's all a dead trail that leads me to believe no contact, not even pizza-delivery-guy contact," Nunes said, appearing to rule out even unwitting contact between Trump officials and Russian agents. Investigators, Nunes said, "don't even have a lead."