A "large and extremely dangerous tornado" was spotted moving east near Ottawa Tuesday afternoon, according to the National Weather Service, part of a weather system that's expected to produce more severe weather into the evening.The tornado was... 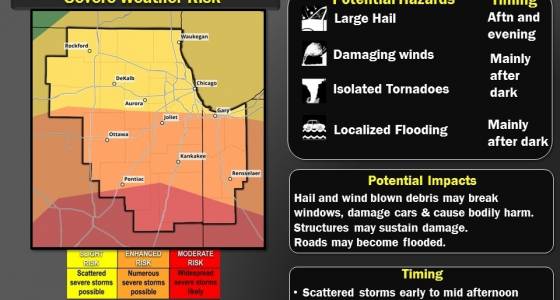 A "large and extremely dangerous tornado" was spotted moving east near Ottawa Tuesday afternoon, according to the National Weather Service, part of a weather system that's expected to produce more severe weather into the evening.

The tornado was located over Ottawa at 4:50 p.m., moving east at 45 mph, according to the warning, which covered southern Kendall, east central La Salle and northern Grundy County until 5:30 p.m. Tornado warnings also were in effect until 5:15 p.m. for parts of LaSalle, Putnam and Bureau counties.

A tornado watch was declared until 10 p.m. Tuesday for northern and central Illinois, northwest Indiana and eastern Iowa, with strong storms including “very large hail” over the whole area and the threat of tornadoes highest south of Interstate 88, according to the National Weather Service.

Thunderstorms were developing Tuesday afternoon west of the Chicago area and the storms were expected to spread Tuesday evening, with storms spreading across more of the area after dark, according to the weather service.

“Storms will eventually develop into a complex ahead of a cold front, which will push east across the outlook area overnight,” according to the weather service.

The watch area includes all of northern and central Illinois, as well five northwest Indiana counties and 17 counties in Iowa.

Check the Tribune's weather page for more information. Check back for updates.