General manager Stan Bowman has said he doesn't envision the Blackhawks making a splashy move before Wednesday's trade deadline.The Hawks made a minor deal Friday to acquire Tomas Jurco from the Red Wings for a third-round pick. If Bowman holds true to... 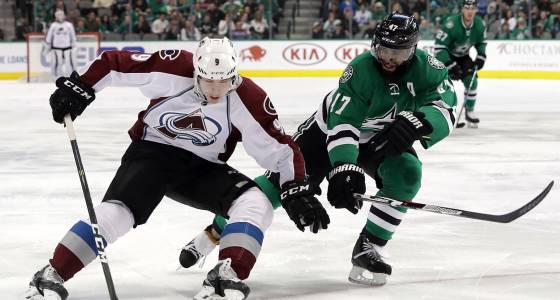 The Hawks made a minor deal Friday to acquire Tomas Jurco from the Red Wings for a third-round pick. If Bowman holds true to his word, it will be the first time in a few years they won't be major players at the deadline.

Just in case circumstances change, here's a primer on some players who might be moved — to the Hawks or others — before Wednesday afternoon.

Patrick Sharp, LW, Stars (7 goals, 8 assists): A reunion between Sharp and his former team is unlikely, but the ex-Hawk is an attractive target for a team in need of a top-six winger. His numbers are down because he has battled concussion issues, but he is back playing and has a bevy of playoff experience.

Matt Duchene, C, Avalanche (16 G, 20 A): One of the top targets on the trade market will carry a hefty price tag to acquire him, and his $6 million salary-cap hit could create issues.

Gabriel Landeskog, LW, Avalanche (13 G, 13 A): One of the few players on the market not on an expiring deal. The Hawks did look into Landeskog this season. He is signed through 2021, but a contender who acquires him can always flip him again in the offseason.

Thomas Vanek, LW, Red Wings (15 G, 23 A): He could be a fit for the Hawks at left wing, but the price tag is likely to be steep. Besides, the Hawks already got someone with a similar first name from the Wings.

Brian Gionta, RW, Sabres (12 G, 15 A): The Sabres captain would reportedly like to stay in Buffalo but might be headed elsewhere before the offseason.

Jarome Iginla, RW, Avalanche (8 G, 10 A): The 39-year-old has seen a drop-off in production but could make for an interesting flier for a team looking for veteran depth up front.

Brian Boyle, C, Lightning (13 G, 9 A): He has a reasonable cap hit at $2 million given his experience and production. He scored five goals in 17 playoff games last season for the Lightning.

Johnny Oduya, Stars (1 G, 6 A): If the Hawks are going to make a big swing, bringing Oduya back could be a possibility. They have tried for a season and a half to replace him as a top-four defenseman since the 2015 Stanley Cup run. Why not replace Oduya with ... Oduya? The only issue would be cost. The Stars should be able to net a good return for Oduya, who despite health issues this season has something left in the tank at 35.

Kevin Shattenkirk, Blues (11 G, 31 A): Even though the Blues are contenders, they are looking to ship Shattenkirk, whom they do not think they can re-sign in the offseason.

Dmitry Kulikov, Sabres (1 G, 1 A): He's a good skater and he can eat up more than 20 minutes per night, but his ability to stay healthy is a concern.

Martin Hanzal and Ryan White to Wild: The former Coyotes went to the Hawks' rival in the Central in one of the biggest moves before the deadline. The Wild paid a steep price — a 2017 first-round pick, a 2018 second-rounder and a 2019 conditional fourth-rounder plus a prospect. Some fans may want Bowman to counter, but he is unlikely to be moved by a significant trade in the division.

Patrick Eaves to Ducks: The Ducks struck quickly to land Eaves from the Stars for a conditional second-round pick. Eaves was one of the most attractive targets in that he has a small cap hit ($1 million) and is having a great year (21 G, 16 A).

Ben Bishop to Kings: The Lightning dealt one of their two quality goaltenders in exchange for backup goalie Peter Budaj, minor-leaguer Erik Cernak, a seventh-round pick and a conditional pick.

The NHL trade deadline is Wednesday, March 1, so here's a look at the best and worst Blackhawks trades ever.